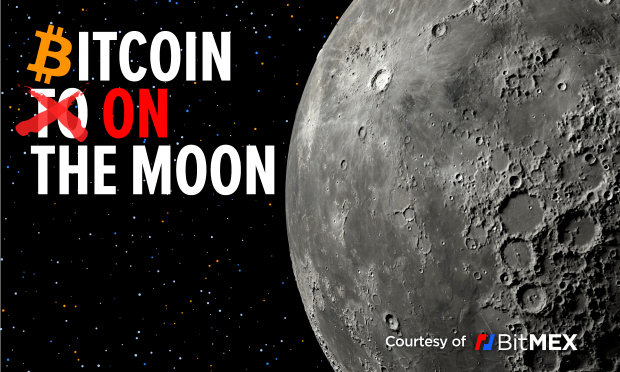 BitMEX has announced that it will be teaming with space robotics company Astrobotic Technology, where it will be sending its first commercial lander to the Moon in Q4 2021 -- and BitMEX will be strapping a physical crypto wallet with a single bitcoin to it, and it will be taken to the surface of the Moon.

In a blog post on its website, the crypto exchange takes a large swipe at SpaceX and Tesla founder -- and major Dogecoin enthusiast, Elon Musk. BitMEX starts off its post, saying: "One Dogecoin protagonist / EV car innovator / space enthusiast recently laid down the gauntlet in saying he plans to send Doge to the Moon. We've nothing against Dog Money, we felt it was only right to help bitcoin get there first".

BitMEX will "mint a one-of-a-kind physical bitcoin, similar to the Casascius coins of 2013, which will be delivered to the Moon by Astrobotic. The coin will hold one bitcoin at an address to be publicly released, underneath a tamper-evident hologram covering. The coin will proudly display the BitMEX name, the mission name, the date it was minted and the bitcoin price at the time of minting".

Alex HÜptner, CEO of BitMEX said: "My day job is to help explore the potential of crypto beyond fiat currencies, so it's hugely exciting to be a part of a project to explore human space presence beyond earth. For all the talk of bitcoin going to the Moon, we're actually going to do it. We couldn't be more happy to be supporting Astrobotic's attempt to put its commercial lander on the Moon".

BitMEX hits everyone in the feels with the end of its post on its official blog, saying: "And, to horrendously misquote the legendary Neil Armstrong as he set foot on the Moon in July 1969: "That's one small step for Man, one giant leap for bitcoin".