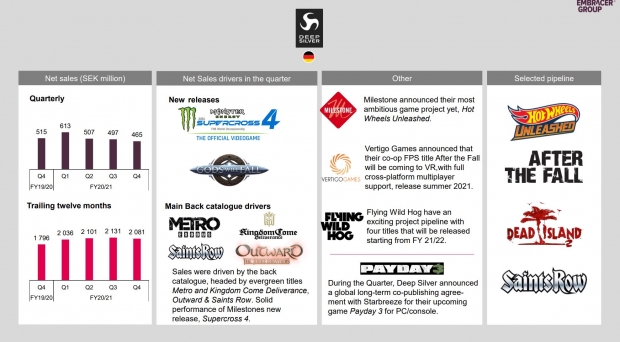 Flying Wild Hog has been pretty busy lately. The studio was recently acquired by Embracer Group's Deep Silver label and has expanded its team to 300 developers to help work on a new slate of games. The team is currently working on four games, and we've heard mention of three of them so far.

"Flying Wild Hog have an exciting project pipeline with four titles that will be released starting from FY 21/22," reads Embracer's most recent Q4 earnings report.

Shadow Warrior 3 is one of these new games, and will release in 2021 as one of Deep Silver's significant titles for the fiscal period. The other two games are more of a mystery.

Flying Wild Hog has teamed up with Focus Home Interactive to work on a new action-based game that's their most ambitious project ever:

"Focus Home Interactive is the perfect partner for Flying Wild Hog. We both share a love for creating unique, exciting worlds filled with crazy gameplay. We also deeply care for quality and creativity. FHI's teams support us not only with great trust for our vision, but also help us to forge that vision into an outstanding game. We are sure that our partnership will bloom into an amazing experience for players around the world. Fans of original action games can expect quite a surprise!" studio CEO Michal Szustak said in 2020.

The other project is one made with Jagex:

Deep Silver's parent company Koch Media is holding a stream event on June 11, so we might see more projects announced (as well as Dead Island 2 and/or Saints Row V).