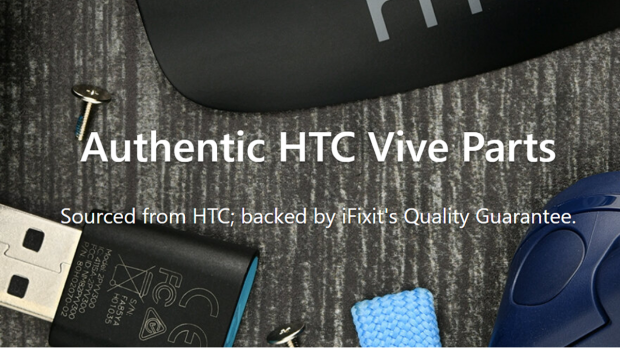 iFixit offers teardown guides for the HTC Vive, HTC Vive Pro, and HTC Vive Pro Eye headsets and a guide for the HTC Vive Controller. I found a large selection of Vive parts, including the outer shell panels, the frame components, and even the sensor array. Exterior Vive Pro parts are available, but internal components are not current listed in the iFixit store. HTC said that repair kits for Vive Pro, Vive Wireless Adapter, Vive controllers and Vive Trackers would be available through iFixit's website.

"This is groundbreaking. HTC is the first VR manufacturer to support their customers with the parts they need to keep their headsets functional," said Kyle Weins, CEO and Co-founder, iFixit. "iFixit is thrilled to help gamers fix their meatspace hardware so they can get back to their important cyberspace business."

This is a welcome move from HTC, and we hope more tech companies follow HTC's lead and make more devices self-repairable.