Microsoft just made it easier for developers to get DX12 features and technologies into their games, for gamers to enjoy, much easier than ever before with the introduction of DirectX 12 Agility. 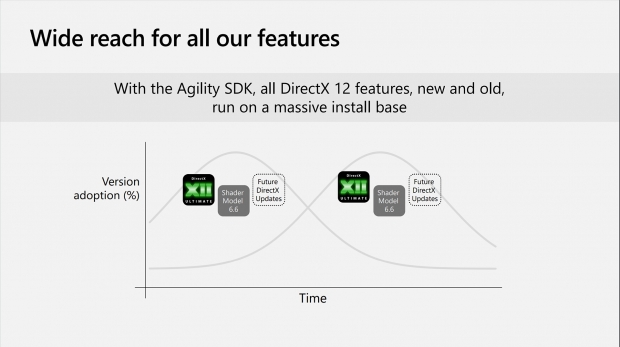 DirectX 12 Agility will allow new DX12 features to skip around Windows Update, and right to gamers -- normally there would be a required Windows Update that PC gamers would need to get new DirectX features. Microsoft points out that Variable Rate Shading (VRS) was a recent feature that couldn't be deployed quickly because of the way updates are pushed to PC gamers through Windows 10.

But now, DirectX 12 updates have been disconnected from Windows Updates with the new DirectX 12 Agility toolkit for developers. Game developers can control which features they use at an SDK level and then push them out to many more PC gamers at once, versus a select few that might have the very latest version of Windows installed -- as that very latest version would be required to use those new DX12 features.

Nick Penwarden, Vice President of Engineering at Epic Games explained: "Our collaboration with Microsoft on the DirectX 12 Agility SDK enables us to easily implement forward-looking Unreal Engine features, and the new distribution model makes them quickly available to our developer and player communities".

Engine Architect at 343 Industries, Tom Holmes, said: "The DirectX 12 Agility SDK allows us at 343 to be confident that the latest innovation from the DirectX team runs for nearly all of our PC players". Meanwhile, Turn 10 Studios' Studio Software Architect, Chris Tector, said: "The DirectX 12 Agility SDK will allow us to adopt the latest DirectX 12 features faster than ever. We are really excited about what this change means for the future of Forza Tech at Turn 10 and Playground Games".