Elon Musk said 4 years ago that he wanted to end languages for human beings with brain implants with his company Neuralink, fast forward to 2020 and Musk said human trials of the brain implant were coming... and now they have a monkey playing pong with his mind. Wow. Check it out:

9-year-old monkey Pager learns how to control the computer and use the joystick to move the ball around on the screen to match up with the orange square, and gets rewarded when he does this with a "tasty banana smoothie, delivered through a straw". While Pager learns how to play the game, the Neuralink team have been pulling data from the chip in his brain.

Once Pager is familiar with the control system, Neuralink disconnected the joystick and Pager was still playing Pong -- but with just his brain. The brain-computer interface, or BCI, is doing the rest -- allowing Pager to control the computer with just his thoughts. The team at Neuralink say this is going to be perfect technology for those who have lost a limb and get a prosthetic installed, which they will eventually be able to control through a BCI.

Of course Elon Musk is going to tweet about this... you knew you were going to see that, didn't you? ;) 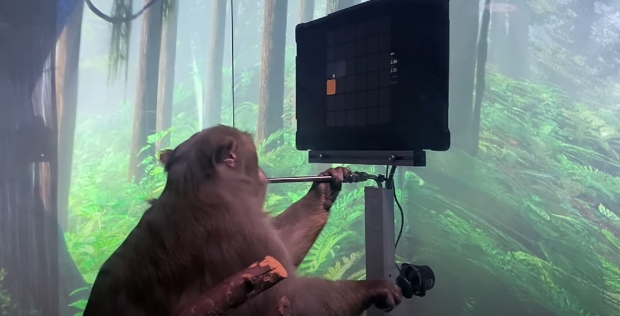