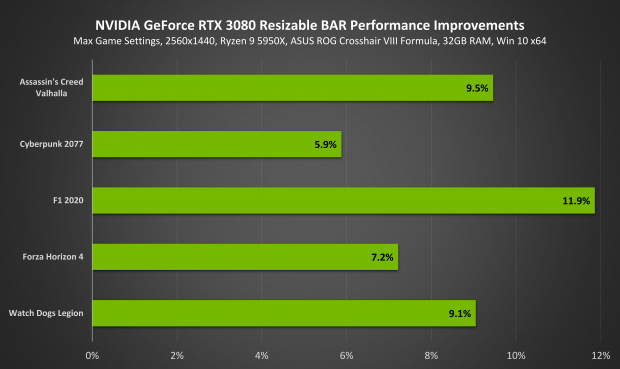 You will need to have the right AMD or Intel CPU and required motherboard, a GeForce RTX 30 series graphics card, and the graphics card firmware to be updated -- and new GeForce Game Ready 465.89 WHQL drivers in order to get Resizable BAR working. It's not easy, but there's some nice free performance of somewhere around 6-12% at 1440p on the GeForce RTX 3080.

"GeForce RTX 3060 graphics card does not require any changes, this was the only model that received ReBAR support out of the box. Other graphics cards, however, will require firmware updates. If you own NVIDIA Founders Edition, then you are required to download a special tool directly from NVIDIA. Those who own partner (AIC) cards will need to go to their websites and find the tool that works for their graphics cards".