It seems as though AMD could be offering not just a single SKU of the Radeon RX 6700 XT graphics card, but two of them -- each with different TGPs. 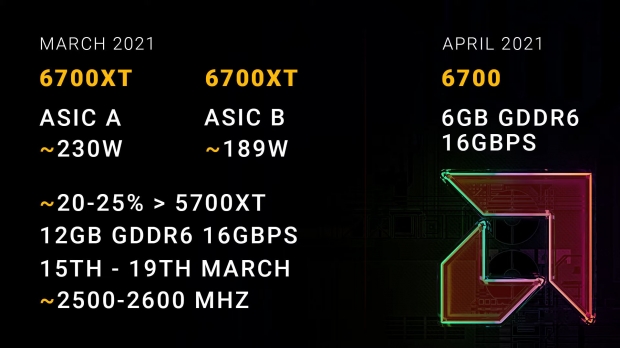 We are to expect a decent 20-25% or higher uplift in performance over the previous-gen RDNA-based Radeon RX 5700 XT graphics card. The new AMD Radeon RX 6700 XT has 12GB of GDDR6 memory at a faster 16Gbps, which I'm sure is going to prime for crypto miners.

Then there's the non-XT version of the card with the Radeon RX 6700, which should be launching a month later in April with half the VRAM (6GB versus 12GB) but it's also at the faster 16Gbps standard. I'm sure this is going to be another GPU that crypto miners are going to gobble up with that fast VRAM.