We've seen lots of awesome handheld creations over the years. Shankmods created a Wii that fits in your pocket, and even squeezed an entire Wii into a tiny Altoids tin. Now GmanModz has broken records with the smallest Nintendo 64 handheld ever made.

GmanModz didn't use any custom PCBs for the build. "Instead I used good old-fashioned board trimming, hand-wiring, and hot glue," he said. Gman was able to shave off space by using JoyCon analog sticks, which reduced the overall length, and a single 1860mAh battery cell, which reduces the thickness and powers the system for about 1 hour 31 minutes. The build is actually over 82,000 cubic centimeters (or roughly 23%) smaller than the previous record holder.

There's no D-Pad or C-buttons, but there doesn't need to be: the JoyCons emulate both of these input schemes. The Z and R buttons are at the top, and the left trigger is emulated by pressing the left JoyCon stick. The screen is a 3.5-inch 320x240p LCD display

The video goes into depth on the exact parts and PCBs used for the build so be sure to give it a watch if you want to try and make a DIY project. 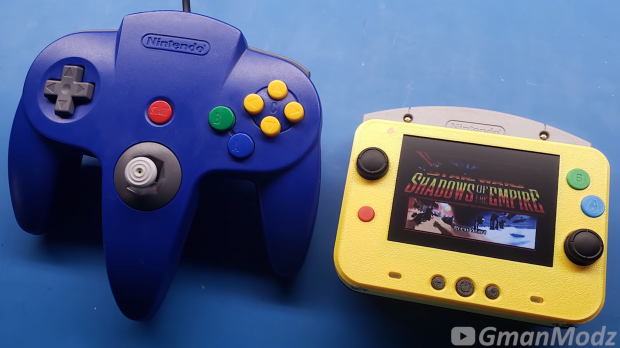