Update: So this is a troll post, someone blew vape smoke into the Xbox Series X -- and these videos have been circulating since. The physical hardware issues with the Xbox Series X/S aren't a surprise, but be careful as people are capitalizing on this right now.

Microsoft's next-gen Xbox Series X console is now appearing in the wild as gamers receive their units, but there are some major day one issues. This particular console caught fire inside, and sent out massive plumes of smoke out of the Xbox Series X console, check it out:

The video you're seeing there isn't just a single Xbox Series X catching fire and puffing out smoke, and a hell of a lot of it. It's like the Xbox Series X console is chain smoking the Zen 2 + RDNA 2 + PCIe 4.0 SSD all at the same time, and puffing it out of the top in what is an expensive paper weight.

This isn't the first that we've heard of physical issues with the Xbox Series X -- where hardware defects are now showing up in the form of strange noises coming from the console and disc drives to name a couple. There are some people with random clicking noises, an infinite-looping OS start screen, and more.

This is definitely turning into one of the worst console launches of all time. It's also happening on some Xbox Series S systems too, and not just the flagship Xbox Series X console. 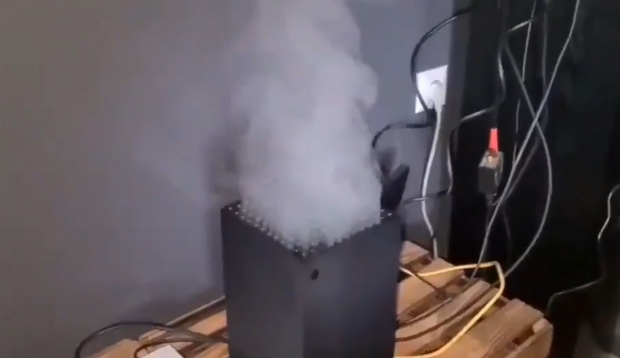