Activision revealed cross-gen SKUs of Call of Duty: Black Ops Cold War and confirmed the finalized Xbox Series X game case design. It's kind of confusing, but luckily it doesn't matter if consumers get them mixed up. 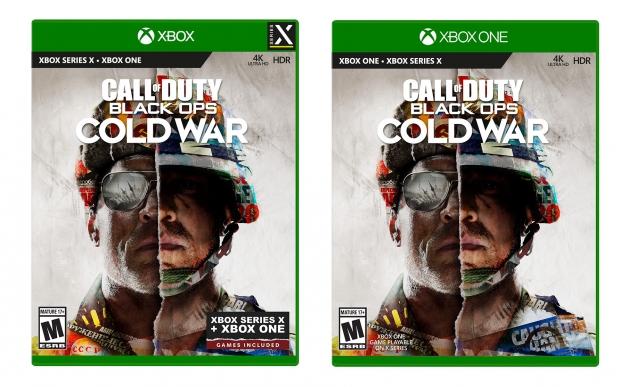 The final Xbox Series X game cases are pretty similar to the basic Xbox One cases--so similar that everyday consumers may buy the wrong version. The next-gen case design in question is for the newly-revealed Black Ops Cold War. The next-gen Xbox Series X version comes with the Xbox One version by default so there's no worry of a mix-up.

The cross-gen cases are similar but have some differences. Namely the Xbox Series X label in the upper right, and the next-gen console is listed first on the Xbox Series X version, whereas Xbox One version has the current-gen console first. Now here's what's confusing: Activision says physical disc versions of Cold War on Xbox One won't include a free upgrade on Xbox Series X. That upgrade is exclusive for digital versions of the Xbox One port, and it'll cost you $10 extra to unlock.

So why is the Xbox Series X listed on the Xbox One version?

Because the current-gen version of Black Ops Cold War is playable on Xbox Series X via backwards compatibility. This doesn't include all the next-gen optimizations though. Popping the Xbox One version into your Xbox Series X doesn't mean you'll get ultra-fast loading, boosted FPS, ray tracing, 4K 60FPS, and other features the XSX is capable of.

The game will still play better on Xbox Series X by default thanks to the console's native boosting of current-gen games. This includes tighter frame rates, upscaled resolution, and faster load times--but not the ultra-fast 2.4GB/sec the XSX's PCIe 4.0 SSD is capable of.

This box design will be the final Xbox Series X game case when the console releases this November. The Xbox Series X is likely due out on November 5, but Call of Duty: Black Ops Cold War won't be out until November 13.