You've probably seen some benchmarks of Flight Simulator flying around, with our take on Microsoft's ambitious new game looking at 8K performance -- a next-gen game, with a next-gen resolution.

Flight Simulator at 8K was pushing my test bed to the absolute limits, where the game is using 16GB of VRAM -- minimum -- at 8K. Yeah, 16GB of framebuffer is being filled which annihilates the GeForce RTX 2080 Ti, RTX 2080 SUPER, Radeon RX 5700 XT, and everything else pretty much.

The only graphics cards left standing is the NVIDIA TITAN RTX -- a card that costs $2499, and the AMD Radeon VII -- only because it has 16GB of VRAM and I would not recommend buying it right now. Cranking up the anti-aliasing (AA) however, began driving VRAM consumption up even more.

In further testing, enabling TAA saw VRAM consumption skyrocket up to 24GB -- filling the TITAN RTX up to maximum VRAM consumption, and pushing the Radeon VII to its knees. 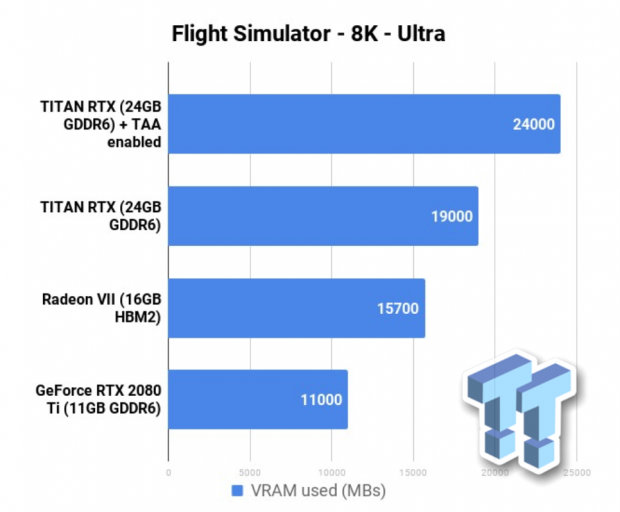 This is why we really, really badly need next-gen graphics cards like the GeForce RTX 3090 which will reportedly pack 24GB of ultra-fast GDDR6X memory.