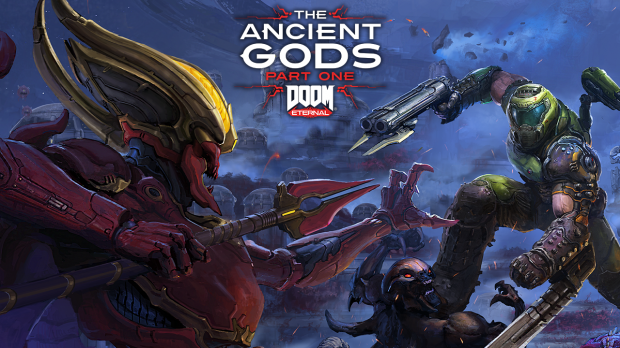 The new Ancient Gods expansion is about to rev up Doom Eternal's lore to 666 MPH. The DLC pack expands on the game's robust story arc, continuing directly off from Eternal's events. Doom Slayer completely obliterated both heaven and hell to save the humans in between...but left behind a cosmic imbalance.

Now the "true ruler of the Doom universe" is coming back, and he's not happy. Doom Slayer's next epic battle could be against The Father himself.

"The Ancient Gods Part I takes place after the events of Doom Eternal. Hell was ripped, heaven was torn, and the Slayer's legend grew. Your rampage of destruction saved humanity but came at a cost," id Software creative director Hugo Martin said during a Quakecon 2020 panel.

"Now there's an imbalance of power in the heavens and the true ruler of of the Doom universe must rise up and set things right."

"Travel to previously uncharted realms of the DOOM universe and confront a new challenge head-on when The Ancient Gods, Part One releases for DOOM Eternal later this year.

The Ancient Gods trailer only confirmed a new Makyr is coming to get revenge, and that the Makyrs can apparently now fuse with demons in some way.

Apart from the next expansion, id says a bunch of new Doom updates are on the way.

"We've been hard at work on updates and new content,"Marty Stratton said.

"Doom Eternal gets bigger and better with every update. Despite the challenges of working from home, we're still looking forward to releasing Invasion and more campaign master levels."

Doom Eternal is also getting next-gen optimizations on both PlayStation 5 and Xbox Series X. These upgraded versions will be free for anyone who owns a current-gen copy.

Ancient Gods Part I is due out sometime in 2020.