The ancient ones are back to restore cosmic balance in Doom Eternal's newly announced Ancient Gods expansion.

Doom Eternal's deep lore is about to amp things up to 11. When we left Eternal, Doom Slayer had basically upended the entire realm of Creation with his actions. He brought fury to both Heaven and Hell, and massacred everything in his wake. As the prophesied Slayer, he brought disruption to the balance, but also freedom for humanity. But the Makyrs, the interstellar omnidimensional archangels of the Doom universe, want revenge.

"Your victory over Hell's armies pulled humanity back from the edge of extinction, but it came at a cost. An imbalance of power in the heavens requires the true ruler of this universe to rise and set things right. Wage war across never-before-seen realms of the DOOM Universe and fight against new demons in your never-ending battle against the forces of evil."

To really understand what's happening in the trailer we have to talk about the lore a bit more. Below we're going to talk spoilers, so be forewarned. 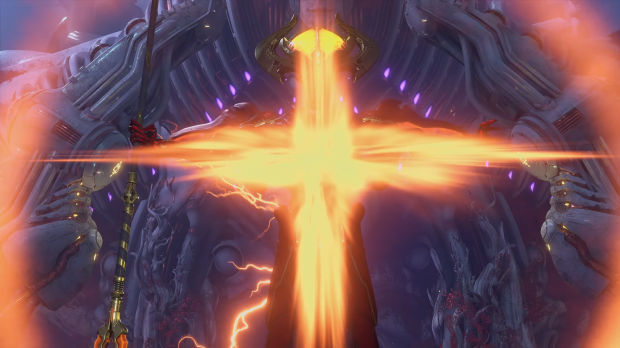 Now that Khan Makyr is dead, the other Makyrs want revenge.

Remember that weird ball of light that shot out of Khan Makyr at the very end of the boss fight cinematic scene? That was a kind of beacon that warned all the other Makyrs of what happened.

"You have broken the holy seal of Urdak. Your transgressions here will jeopardize all of Creation," Khan Makyr said before dying.

The new Ancient Gods trailer clearly shows an unholy union between the Makyrs and demons. Makrys are supposed to be the manifestations of The Father, basically the Doom universe's "god", and demons are obviously hellspawn that rule the underworld. Humans are in between. But demons signed a deal with the Makyrs to use humans as an energy source. When humans died, their souls would be funneled to the Makyrs above and used as a kind of phantasmal battery. This deal was made by the Betrayer, the human that sold out humanity to both sides.

Now that Doom Slayer has disrupted both Heaven and Hell, it's time for revenge. The pact between the Makyrs and demons apparently still stands, and that's why we're seeing the corruption of the Makyrs in the teaser.

We don't know who the Makyr boss that was shown in the teaser actually is.

Oh, and VEGA is apparently The Father now. The Father's essence was apparently stored in a digital tome of sorts called the Luminarium. VEGA accessed this database when opening the ports for Doom Slayer in Urdak.

Suffice it to say, there's a lot to look forward to when the Ancient Gods Part 1 drops in 2020.