If you happened to miss what could be considered the biggest news for human space travel in a while, here's a quick update:

SpaceX successfully completed its round mission of taking NASA astronauts Bob Behnken and Doug Hurley to the International Space Station. This mission was historic, as the last time an American crewed space capsule launched and splashed down off the US coast was in 1975 from the Apollo-Soyuz joint U.S.-Soviet Union space mission. Overall, things went quite smoothly, but there were a few hiccups in retrieving both astronauts.

Those hiccups weren't technical, but more so, social, as what seems to be a dozen or so boaters came to check out the landing site for Crew Dragon. While everyone can probably understand a certain level of curiosity is justified, but to approach the craft itself is something else entirely. Things that arrive from space aren't automatically safe because they are back on Earth, and an example of that is the Crew Dragon capsule as the recovery team detected nitrous tetroxide, which is used as a propellant for the Dragon's maneuvering rockets and is also toxic when inhaled.

The recovery team detected the nitrous tetroxide in the air around the capsule, and had to wait for it to disperse before removing the astronauts. This is a simple example of how private onlookers on boats can get injured when attempting to interfere with the recovery process.

NASA administrator Jim Bridenstine said in a statement, "I will tell you it's a beautiful sunny day and a lot of boaters were out there and they were certainly intrigued. I think all of America was very anxious to see the capsule land in the water, but yeah, it's something that we need to do better next time." 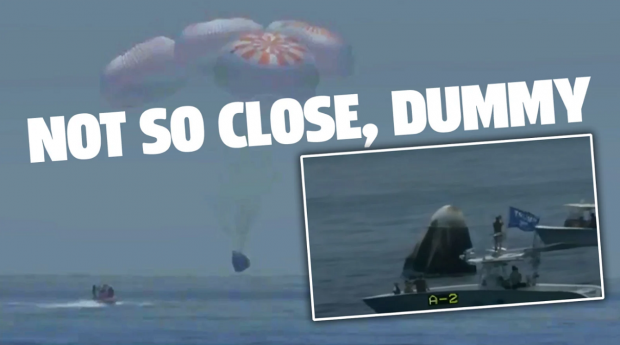