Thanks to a recent graphics controversy, Halo: Infinite is in the headlines for all the wrong reasons. The game isn't the next-gen spectacle we all expected, nor does it seem like a system-selling game. But a closer look at 343i's new engine and lighting systems reveals the reason the game looks decided last-gen.

Why does Halo: Infinite's gameplay look so bland? Why does it look like a last-gen game? It all has to do with the game's new dynamic lighting system. Halo: Infinite is a huge open-world game now, and it has a fluctuating lighting system that blankets the entire world. There's no tightly-designed linear levels, meaning the lighting system isn't fine-tuned, but more spread across a bigger area.

A new deep dive from Digital Foundry uncovers some of Infinite's issues, challenges, and advantages with its new dynamic lighting system.

The lighting shifts on objects like environments, weapons, armor, and enemies depending on where you are in the map, and how high up you are. A lot of the gameplay took place in shadows cast by huge overhanging buildings, which of course made the visuals look rather unimpressive. The reality is 343i's screen-space reflections and ambient occlusion tricks just aren't enough for a huge open area like Infinite.

The general gist is that Halo: Infinite uses dynamic lighting, which is a lot harder to make look nice than the static lighting used in amazingly high-detailed games like The Last of Us 2. The difference is static lighting is, well, stuck in the same spot and environments use textures with lighting illusions/effects built right in. But static lighting takes forever to develop considering each texture is typically adjusted to meet the scene. 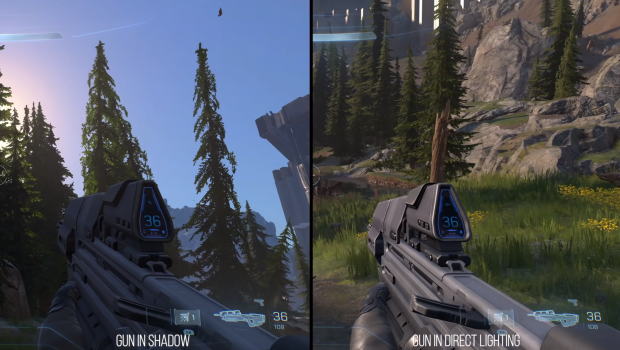 Halo: Infinite's models actually have high-def textures, but they need lighting to show off the detail. Ray tracing could help illuminate these models even when scenes are cast in shadows.

Dynamic lighting also has its advantages.

Objects are illuminated in real-time, but the lack of bounce lighting textures typically less detail. Dynamic lighting also allows day-to-night cycles and significantly reduces development time, which is important for 343 Industries because they're also making the new Slipspace Engine alongside the game. As Valve, BioWare, and countless other devs can attest, making a new game alongside a brand new engine can be a nightmare in the best of times. The recent pandemic adds another layer of complexity to iteration.

In this image, grunts are obscured by shadow and therefore lose a lot of their model/texture definition.

The main reason the game looks so awkward in shadowy areas is because the light is obscured by other things. A ship, a building, trees, or outcroppings can absorb the light and cause the specific scene to look rather last-gen. So things like guns, enemies, and environments look less detailed and rather flat in shadow.

343i's lighting system uses screen-space lighting techniques like SSAO to emulate static lighting techniques and advantages. The lighting probes will pop in and more definition will be shown, but only as you get closer to the object or environment. SSAO also means there's more artifacts and obscuring of shadows of far-away areas, scenes, and objects. This technique was actually used in older games like Far Cry 3, which was released in 2013. 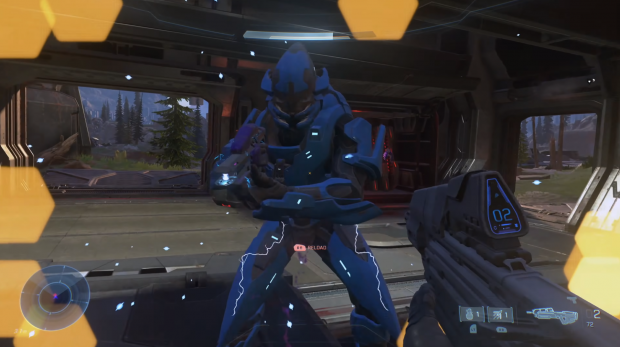 This Elite likewise loses all of his definition because he's stuck in the shadows.

As Digital Foundry explains, games textures used to have lighting built right in. Artists would design textures already made with lighting features. There were two major textures that devs would use to showcase lighting in scenes to ensure models look appropriately well-lit even in shadowy areas:

Diffuse Texture -The harder contrast textures that showed details like hard shadows, damage/scuff marks, and reflections. These details were seen regardless of the scene lighting, but doesn't respond to real-time lighting sequences, e.g. when the sun or light sources are overhead vs. when they're setting.

These days games use Albedo textures that use a special gloss texture layer that reacts to real-time lighting. But these textures lose lots of detail when not in direct light. They need light sources to make them pop.

For some reason, 343i chose to showcase their big next-gen hit during scenes that take place primarily in shadow, which made all the graphics, environments, and weapons look unfinished. 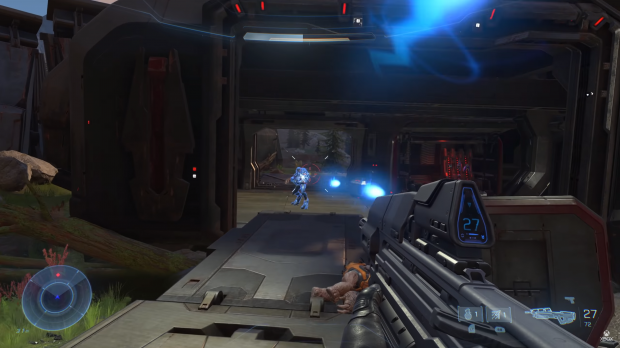 Look at the bulkhead's lack of definition on the left, or even the log. That's a direct result of the new dynamic lighting system when the textures simply aren't getting any light.

So what can be done?

Digital Foundry's Alex Battalgia notes that tracing could fix the lighting, whether it's hardware-based ray tracing or in-engine software global illumination found in new software like Unreal Engine 5 or the latest CryEngine tech.

Ray tracing would trade the shadows and add another layer of lighting to the textures, thus illuminating and revealing the higher-end models that 343i has made for the game. The result would be less flat-looking graphics and gameplay even in shadows all while preserving the reactive reflections from the dynamic lighting system.

That's why ray tracing is so revolutionary when it comes to visuals--and it's doubly so for games with dynamic lighting.

Sadly this might not happen. We could be stuck with Halo: Infinite's current shadows and illumination. There's been no talk of ray tracing in Halo: Infinite, just the usual claims of 4K 60FPS. Ray tracing typically takes a big hit on both resolution and frame rates so if Halo: Infinite does get ray tracing, it could drop to 1080p 60FPS max on the Xbox Series X or PC.

4K 60FPS is a big thing for the Xbox Series X, and we could see a variable mode tossed in, but that would undermine the big 4K60 buzzword PR bulletpoint. I'm not sure if gamers would rather to play 4K60FPS with bad lighting/wonky textures or variable 1080p-1440p at 60FPS with ray-traced visuals to expose high-end models.

That being said, both Microsoft and 343 Industries promise Halo: Infinite will be a "visual showcase" when it releases in November, so we could see ray tracing enabled after all.