Destiny 2's new Beyond Light expansion has been delayed from September 22 to November 10, 2020, Bungie today announced.

Remote work complications have convinced Bungie to delay Destiny 2's ambitious new Beyond Light expansion to November. Bungie's development team are now working from home, making communication more difficult, and they simply need more time to make the expansion. Beyond Light includes a new area in Jupiter's icy moon of Europa and the ability to wield the Darkness for the first time ever.

"While we're sad to keep the secrets of Europa under wraps for a few extra weeks, our dev team is putting in the work to deliver an adventure that is worthy of your bravery. Doing that work from our homes finds us very far away from our usual ideal of working together in a studio - currently still quarantined. So we're taking the time we need to do it right under the most challenging of conditions," Bungie said. 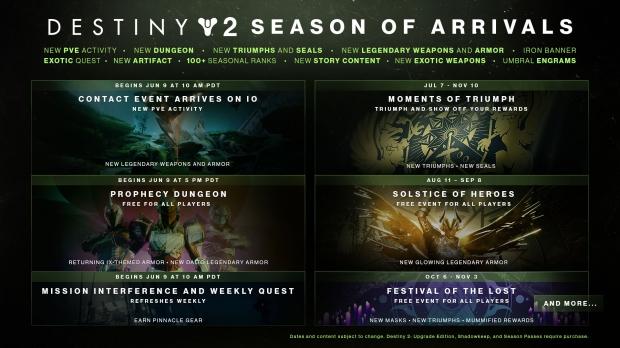 The annual Solstice of Heroes event will start August 11 and ends on September 8. Bungie plans to extend Moments of Triumph right up until Beyond Light drops on November 10. The annual Festival of the Lost is also coming on October 6 and runs to November 3.

Beyond Light is now launching on November 10, 2020 on all platforms and is the start of a big new trilogy of expansions and content. Beyond Light will kick off a new season alongside a brand new storyline that explores the heart of the Darkness and brings to light even more of the game's sci-fantasy mythos.

A new power is born out of the ancient Pyramid ship above Europa, and a dark empire has risen beneath. In the Destiny 2: Beyond Light expansion, Guardians will explore a changed universe, with a new destination, new adventures, and even new powers to explore.

In Beyond Light, Guardians will be called to a new destination: Jupiter's frozen moon of Europa. Brave the unrelenting glacial frontier, infiltrate the Golden Age Braytech facility, and uncover the secrets that lie deep under the ancient ice.

As a new threat emerges, so too does a mysterious new power - Stasis. Rooted in Darkness, Guardians will wield this new elemental power alongside Arc, Solar, and Void to summon epic supers and control the battlefield. Titans, Warlocks and Hunters will each use Stasis in a different way. More details on Stasis to come later this summer.

Below the frozen tundra of Europa lies the Deep Stone Crypt. For decades it has remained dormant. Guardians will test their skill and teamwork in this brand new six-person raid, where glorious rewards await.

The splintered houses of the Fallen have rallied and built their new empire on Europa, united under the banner of the Fallen Kell of Darkness, Eramis. Abandoned by the Traveler and left by the Light, Eramis is on her own journey into the Darkness, and towards a collision course with Guardians.