Today Bungie officially confirmed Destiny 3 isn't happening. The future of the franchise will live on in Destiny 2, complete with three major new expansions that will carry the game all the way through 2022.

Bungie is making big moves with Destiny. Instead of following the sequel-ized roadmap Activision originally pushed, Bungie is making Destiny into a single continuous live game. There won't be any more mainline Destiny games going forward, only expansions and updates. Bungie pretty much hints this is how Destiny should've been from the start.

"We're not planning to make Destiny 3. We believe really strongly we want the future of Destiny to be inside of Destiny 2. So, you know, this is the way," Luke Smith said in a live Q&A session with Dr. Lupo.

Today's announcement also included a trilogy of new expansions that will further Destiny's sci-fantasy story. Bungie promises this will be three-part arc that explores the full spectrum of the Light and the Darkness.

Bungie also confirmed that all Destiny 2 content will carry forward to next-gen consoles. Gamers will be able to carry their entitlements over to PlayStation 5 and Xbox Series X, and Bungie will enable cross-gen play.

This means PS4 gamers can play with PS5 players, but full cross-play hasn't been confirmed yet. There's still no word on official cross-play will be added. 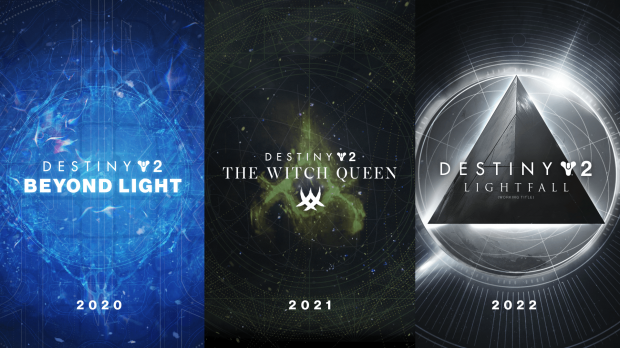 Without Destiny 3 there's no reset switch. Bungie can't just start over again with Destiny 3 and build from the ground up. This is massively advantageous since it won't disrupt gamers' progress, but it brings lots of hurdles, namely with upkeeping such a huge live game that continues to grow.

Bungie's solution is a novel one: the Destiny Content Vault.

They'll carve up the game and rotate old content and destinations out of the base game and move them into the Destiny Content Vault, a separate companion system that hooks right into Destiny 2. That way they can keep the main game's file sizes low, keep devs streamlined, and allow gamers to experience older content on demand.

"Instead of building a Destiny 3 and leaving D2 behind, each year, we are going to cycle older, less actively played content out of the live game and into what we're calling the Destiny Content Vault (DCV)," DeeJ said in a recent Bungie.net blog post.

"This will allow us to add to and support D2 for years, including the three new annual expansions we announced today, starting with Beyond Light this fall."