Intel is just over a week away from making its new 10th Gen CPUs official, with the flagship Core i9-10900K offering 10 cores and 20 threads of 14nm+++++++ power. All those pluses really mean temperature, and with lots of them, that means these new CPUs run really hot. Like, really hot.

In some early results by Weibo user Wolfstame, we see that Intel's new flagship Core i9-10900K runs ridiculously hot, all while gobbling down huge amounts of power. Intel's biggest issue is the 14nm node that they're stuck on, while their competitor in AMD has coasted by and is riding smooth on 7nm... it now shows, a lot.

The Core i9-10900K is a 125W part that during Wolfstame's testing, reached a peak temperature of a super-hot 93C -- and that's with a decent 240mm AIO cooler. Yeah, so stock cooling is going to require LN2 to keep it cool I guess. Power consumption was awful too, with up to 235W under full load in AIDA64 FPU stress tests.

If you're going to buy Intel's new Core i9-10900K and want to see the maximum Thermal Velocity Boost clocks? You're going to need some pretty kick ass cooling, so look into a larger premium 360mm radiator, or a custom loop water cooling setup. 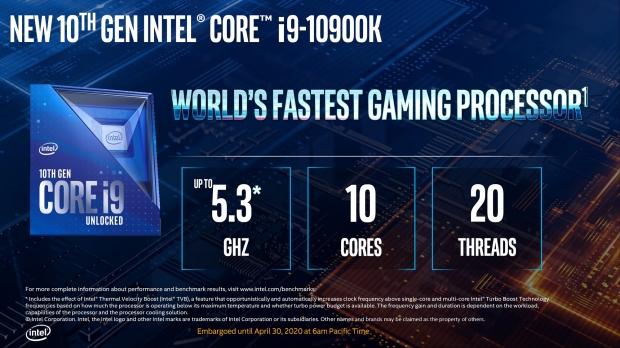 Nothing here will improve until Intel is able to shift down to another node, 14nm has reached its utter limits. All while at the same time this is actually astounding that Intel were able to do this (up to 5.3GHz with 10C/20T) all on a very aged, very run down 14nm node.