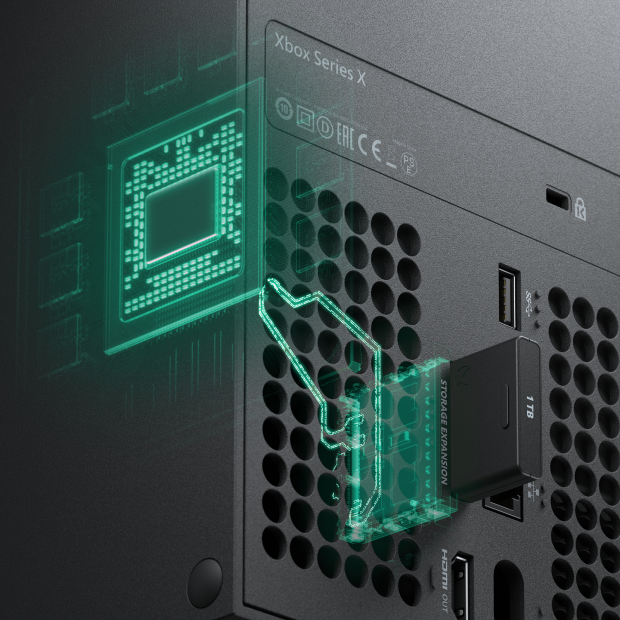 Games are getting way, way too big. Warzone is over 100GB, Red Dead Redemption 2 is the same, and even Final Fantasy 7 Remake clocks in at 80GB. The Last of Us II could also be 100GB on two Blu-ray discs. Next-gen consoles like the Xbox Series X have the potential to dramatically reduce the size of games through a combination of hardware and software, both of which revolutionize how console data is managed, stored, and processed.

Speed is a big part of how storage will be revolutionized on Xbox Series X. The console's new ultra-fast 1TB PCIe 4.0 SSD can blast compressed data through at 4.8GB/sec to the new SoC-based decompression block, which then rapidly decompresses the data and sends it to the RAM, CPU, and GPU for processing. Once it's decompressed, the SSD can deliver stored uncompressed data at 2.4GB/sec to the rest of the system.

The new Velocity Architecture makes this pipeline possible, and Microsoft's new DirectStorage API also reduces CPU overhead by helping load textures through the accelerated pipeline as you play. DirectStorage also lets developer use the SSD as a virtual RAM buffer that prepares assets for the 16GB of GDDR6 shared memory, which then blasts it out to the SoC for processing.

Microsoft gives an example that devs may let you carve up audio language packs to further reduce file sizes. If you speak English, for example, you won't need a French, Spanish, German, or Japanese audio track.

Despite the huge potential for this tech, Microsoft warns consumers not to expect every next-gen game to markedly smaller. Developers have to find the best way to optimize their game and that might not always mean smaller content.

"It is top of mind for us. It's something we work closely with all the industry middleware companies, as well as developers on, and then we provide a whole series of tools to help them drive the size of those games down not only to minimise the amount of content you need to download, but also the overall size on the actual footprint on disc," Microsoft's partner director of program management Jason Ronald told Eurogamer.

"It's definitely a challenge. It's definitely something we work hard on. But there's no easy button that just magically makes everything smaller. What we don't want to do is limit these amazing worlds and universes the game developers create. We just need to give them the tools to be able to make the right trade offs."

So basically Microsoft isn't mandating that developers do certain things and gives devs freedom to utilize the hardware, architectures, and software as they see fit. Which is the best way to do things.

"So once again, it's about providing the flexibility so we can be as sensitive as possible to players' bandwidth and hard drive sizes, so people get a great gaming experience without unnecessarily using more data or using more storage than they need to," Ronald said.

The Xbox Series X will release Holiday 2020, but no pricing or exact release date have been announced.