When Doom Eternal hit, everyone complained about the marauder. He's tough...until you know how to beat him. But he's nowhere near impossible to kill. Apparently gamers (and even outlets) are still complaining, so it's time to set the record straight: The marauder doesn't suck. You do. 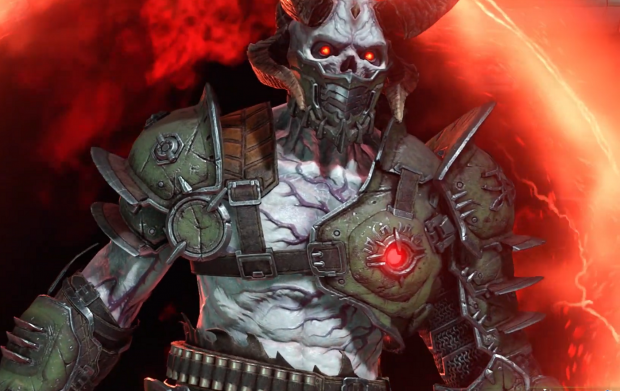 Doom Eternal is a balls-to-the-wall thrill ride of a game. It's all about massacring demons in a whirlwind frenzy of death, mayhem, and total annihilation. You're a living force of nature in Doom Eternal, a hurricane that just leaves blood and guts in their wake. That momentum is only made possible by adaptation and skill.

The marauder is a badass. He's just like you, only demonic with some seriously hellish medieval weaponry. But he can be killed. He's not invincible. Is he annoying? Sure. But he's extremely important. The game wouldn't be the same electric chaos without enemies like the marauder. When he spawns into a battle it's always an event, and things are kicked up to 11.

The intensity is amped, your adrenaline spikes, and your reflexes take over as you adapt to the insanity that unfolds before you; chainsawing adds for ammo, igniting hordes for precious armor, cycling through your resources and dodging, headshotting, and exploding your way to victory. If you're good enough, it won't matter what gets in your way.

And if you think these horned demons are the problem, wait until you loose control of an archvile fight, or get overwhelmed by a cyberdemon. That's when things get really tough.

I'll admit the marauder kicked my ass at first. But instead of bellyaching about how tough Doom Eternal is, I decided to hop online to get tips. Turns out the marauder isn't all that tough if you know what to do. Go figure, right? Learn how to deal with an enemy and they lose a lot of their power. Keep shooting the marauder's shield and panicking, and you'll just keep dying over and over.

It's not very fair to just say you suck without giving you advice on how to get better. So that's what we plan to do. We all sucked against the marauder at first. It's part of the Doom Eternal progression scheme that's survival through intense stress and chaos. 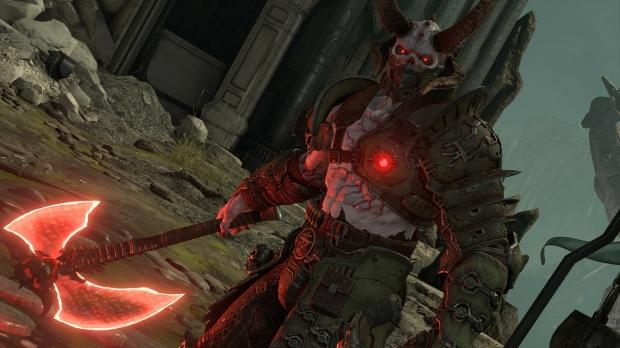 So how do you beat the marauder? There's a few ways, but all of them hinge on you killing the adds first, not panicking, and paying attention. The marauder goes through a few animations and attacks. If you're too close, he'll swipe you with his axe or blast you with his super shotgun. If you're too far, he'll summon his wolf (kill the wolf at all costs) and then fling a bolt of red destruction at you. Shoot at him and he'll raise the shield and block everything (even BFG shots).

But the marauder will always telegraph his opening weak spots.

When you hear a specific noise and see a green glint, that's when you strike.

To make easy work of the marauder, you need to set some custom keybindings. You want to switch between three main weapons as fast as possible in a specific rotation: SSG-> Ballista -> Shotgun. The weapon wheel is way too slow. Use custom keybindings that are close to your fingers. I use T for SSG, F for Ballista, and V for Shotgun. I also thrown in Z for the Rocket Launcher for crowd control.

Once you get this rhythm and flow down pat, you can experiment with other weapons. But try these first.

When you see the glint, don't think. Just shoot. Blast with the SSG, then quickly jump over to the Ballista, and follow up with a Shotgun blast. The last blast doesn't always matter. Also get good at strafe-dashing, too.

Another way is to just spin around the marauder real slow when he attacks and blast him in the back. This betrays the keep-moving sentiment of the game, but once you do it, you'll be amazed at how easy it is.

You can get some practice in on Taras Nabad. A marauder shows up right at the beginning of the level, so keep trying out the rotating until it becomes second nature. Once you learn quick keybindings, the game opens up to you and becomes much more fun.

Ultimately Doom Eternal wouldn't be the same without the Marauder. That's true for all it's enemies, but especially true for this SSG-toting, axe-wielding badass.

And just in case you feel like cheating, or messing around with console commands, we have you covered there too.

But seriously, beat the marauder without cheating first.