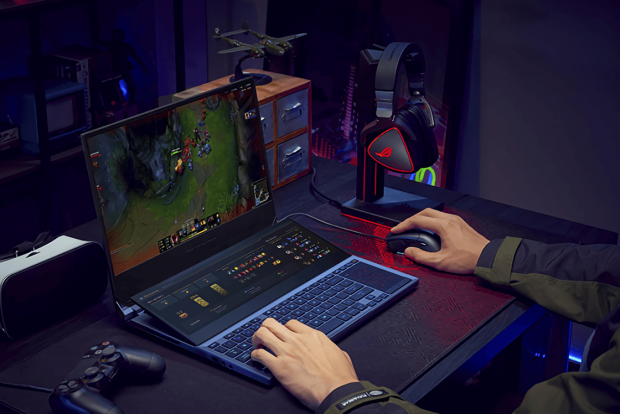 Razer took the veil off its their new Blade 15 gaming notebooks less than 24 hours ago, with ASUS following through with the unveiling of its own kick ass new gaming laptop in the form of the ROG Zephyrus Duo 15.

The new ASUS ROG Zephyrus Duo 15 is a dual-screen gaming notebook, that wants to fill a slot in the market that no one else really dominates right now. It's the world's first dual-screen laptop aimed at gaming, and it's a little interesting to say the least.

But it's the second display that will have your attention, with ASUS building in a 14.1-inch touchscreen-capable display, with a native 3840 x 1100 resolution and 60Hz refresh rate. At its top edge, the 14.1-inch display will lift off of the ROG Zephyrus Duo 15 and slot up at a 13-degree angle.

Why would you use that second display?

Well, you could have some of your gaming-related apps or tech-focused apps open, including MSI Afterburner or GPU-Z, while gaming. Alternatively, or even to the side, you could have Twitch or Discord sitting there so you can keep your comms nice and in-view while gaming away.

ASUS has even gone as far as partnering with developers in order to create content with special interfaces and controls for its new dual-screen gaming laptop. ASUS teamed with Adobe for some specific content creation tools, too. The company is working with Techland on optimizations for Dying Light 2, while also teaming with Overwolf to make apps for huge games including CS:GO, Fortnite, and League of Legends.

ASUS will have its new ROG Zephyrus Duo 15 gaming laptops available in the US in Q2-Q3 2020.