Alright, so I need to do this -- it has gone to the top of my bucket list instantly. Jetman Dubai has unleashed a new video that shows pilot Vince Reffet flying through the sky in a jet-powered carbon-fiber suit like a real-life Superman, or Iron Man, depending on how you want your superheroes.

The pilot launches off the ground and flies into the air at around the 2-minute mark in the video, flying around Dubai and heading south towards Jumeirah Beach Residence. Jetman Dubai notes that Reffet in "eight seconds [Reffet] had reached 100 meters height, in 12 seconds 200m, 19 seconds 500m, and reached 1000m in 30 seconds at an average speed of 130 knots". Crazy, but oh-so-damn-awesome stuff.

Reffet has a bunch of GoPro cameras attached to the suit which gives us some utterly gorgeous footage of his flight, which is wicked-fast in the end and makes me want to do it personally... even though I'm deathly afraid of heights, it would be a once-in-a-lifetime experience, that's for sure. 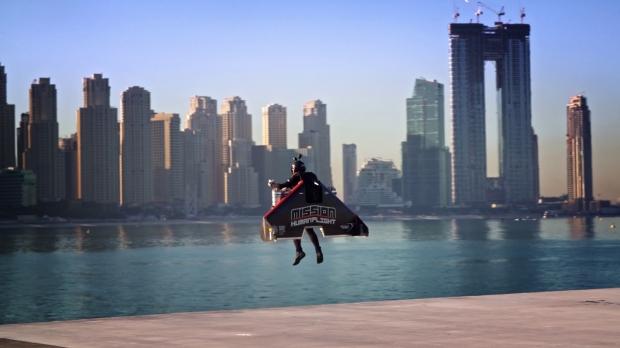