The internet went crazy when they saw Baby Yoda in The Mandalorian, as his cuteness melted faces. But how much did that cuteness cost Disney? First off, massive spoiler warning for anyone who hasn't seen the first season of The Mandalorian. Now that the disclaimer is over let's move on to how much Baby Yoda costs and how a number was brought up. In the final episode of the season, a stormtrooper punches Baby Yoda, and that stormtrooper was actor Adam Pally. Pally spoke at the Television Critics Association's Winter Press Tour, where he was asked about this final scene and what it was like to punch Baby Yoda.

Here's what he said, "I remember the first take that I did when I punched him. They called 'Cut!' and [showrunner] Jon [Favreau], who was watching on a monitor in his office, he came down from this office and said, 'I just want to let you know that this is the hero Yoda [the main prop used for close-ups] and it costs, like, $5 million. So while I want you to hit it, I just want you to know that.'".

Pally then explained that after he was warned about Baby Yoda's cost that he messed up the next three takes because he was so nervous about damaging the prop. I mean fair enough, right? If I was acting and the showrunner surprise warned me about the cost of a prop that I'm meant to be smashing in the face, I'd be pretty nervous about it as well. Disney spared to cost when it came to Baby Yoda, and it seems to have paid off in their favor. 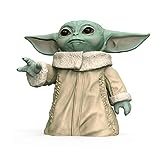