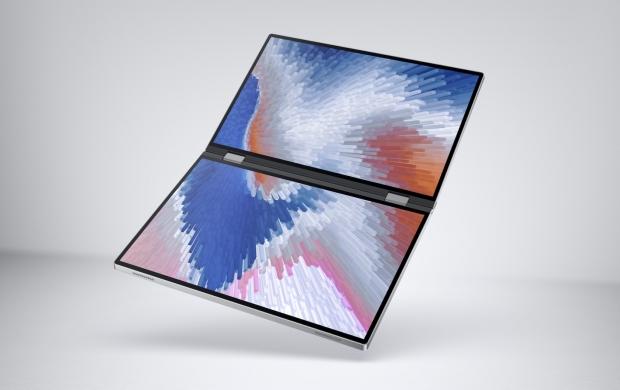 Alienware's new experimental Concept Duet laptop doesn't have a keyboard or any buttons. It's basically two 13-inch screens that fold together via a clamshell clamp that're both fully integrated in an Intel-powered Windows 10 platform. The screens are full touchscreen panels with pen support similar to a souped-up, high-powered Nintendo 3DS, and the device can be folded vertically like a book, horizontally like a traditional laptop, and can also use one screen as a kickstand for tabletop use (or folded into a tablet for single-screen use).

Dell's main use case for Duet Concept is for productivity and content creation like digital art. It looks pretty convenient for anyone who needs to bring their touch-oriented work with them on-the-go, and the demo showed a Skype call on one screen and a note-taking app on the bottom. Thankfully the Duet has a special magnetic keyboard that attaches to the bottom screen so you type more efficiently.

"Concept Duet will allow you to take a touch and pen experience with you wherever you go. You'll be able to see more at once, you'll have better access to your data, and you'll be able to complete multiple tasks more efficiently."

There's no word on what's inside Concept Duet--possibly one of Intel's latest Ultrabook chips--and the tech itself is pretty experimental so don't expect an actual release. If it does come out it'll probably be pretty expensive.

Dell also revealed the Alienware Concept UFO, a new device that essentially merges a PC with a Nintendo Switch.