The rumors were true: Microsoft is making a Surface phone, and it has two screens. This new Surface Duo could be its answer to handheld gaming.

Microsoft has always been woefully behind when it comes to handheld gaming. But all of that could change with today's Surface Duo announcement, a new Android-powered device with hinging dual-screens. Microsoft showed off various use cases for the Surface Duo at its recent event, and gaming in particular has tons of potential.

The Surface Duo is transformable, making it somewhat like the Nintendo Switch. It doesn't dock, but you can use it like a 3DS, like a full display, or a half-display, mirroring the Switch's Tabletop Mode and Handheld Mode. Users can either hook up an Xbox One controller wirelessly via Bluetooth and use the dual screens as a portable gaming display, or flip it and hold like a 3DS and use the bottom half as a touch-screen controller while the top is used as a display.

In tandem with Microsoft's upcoming cloud streaming service Project xCloud, the Surface Duo will transform into a fully-fledged gaming handheld that plays Xbox games with console-quality graphics. It's another big step in the company's multi-faceted and hugely synergistic gaming-services-hardware plan.

With Project xCloud, the device is basically a gaming console that fits in your pocket, but one that folds out butterfly-style to make a bigger screen.

"Surface Duo is the first Surface to fit in your pocket. Surface Duo brings together the best of Microsoft productivity experiences, Android apps and Surface hardware design into a single device you can take anywhere. And, yes, it makes phone calls. It has two paper-thin 5.6-inch screens that unfold to 8.3 inches, and just like Surface Neo, it can be used in a variety of modes to let you work the way you'd like," Microsoft said.

Folding the Surface Duo into the digital-based ecosystem is a big move. Microsoft wants everyone using, subscribing, and buy into and from its services frameworks. Unlike Switch, there won't be any physical media (the Surface Duo is basically a phone, after all), meaning gamers will buy from the Google Play Store and Microsoft's own digital storefront--and subscribe to services like Project xCloud.

This is a substantial power play by Microsoft that has tons of implications for years down the line, and we can see how the Surface Duo will help forge a new mobile hardware-based service ecosystem for the games-maker for the next decade.

Expect to see all Surface devices--especially the Surface Duo--act as conduits for Microsoft's Xbox gaming ecosystem, especially when it comes to services like Project xCloud. 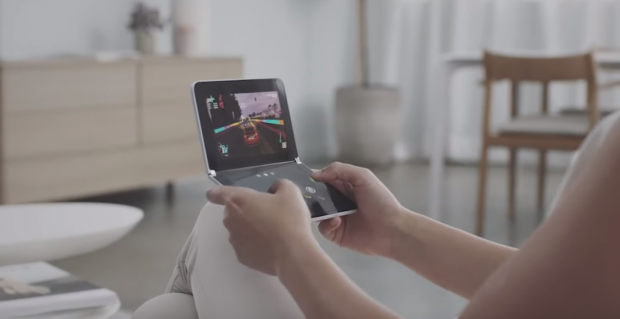