Microsoft's new Flight Simulator is one of my most anticipated games of 2020, and now the hype meter for it just went up a few notches. First, check out this video -- and second, below I'll write about how amazing this game sounds.

Gorgeous, isn't it? But it's not just pretty -- it is smart underneath, too. Microsoft is using Bing Maps data to populate the world of Flight Simulator with real-life locations, including living elements like trees, traffic, wildlife, running water, and even real-time and real-world weather. If it's raining in Los Angeles and you want to take off from LAX, you can have the real-time weather from LA and fly through it.

Microsoft is using the cloud to do most of this magic with the company calling it "adaptive streaming" which sees parts of Flight Simulator rendered, and streamed to your PC from the cloud. This means that the better your internet connection, the better and more detailed the game will be.

Flight Simulator has a huge draw distance of 600km (!!!) that will let you (at least in the right weather conditions) enjoy some of the most beautiful sights our gorgeous planet has to offer... if you have the internet connection and PC grunt to handle it, that is. You can see storms hundreds of miles away, with lightning cracking inside of clouds which I'm sure is going to look mind blowing in-person.

There will be an offline mode where you will pre-cache portions of the game, but if you wanted to have the full experience you'll need to be connected to the internet. Flight Simulator is a very solo game so normally I would be apprehensive about needing to have an always-connected game like this -- but, with this game it makes total sense to be connected at all times for the best experience.

Flight Simulator has huge amounts of immersion with small details looked after, with PC Gamer playing the game recently noting: "It has all the things a hardcore simulator fan demands from a game like this: licensed planes, realistic aerodynamics, simulated weather, icing, load factor, fuel consumption, thermic updrafts, and native support for a wide variety of sticks, yokes, and throttles. But the game doesn't merely want to replicate the cold, mathematical reality of flying, but the drama and romance of it too. It's flight as an experience, not just a series of calculations".

PC Gamer has an awesome write up on Flight Simulator, I suggest you check it out. 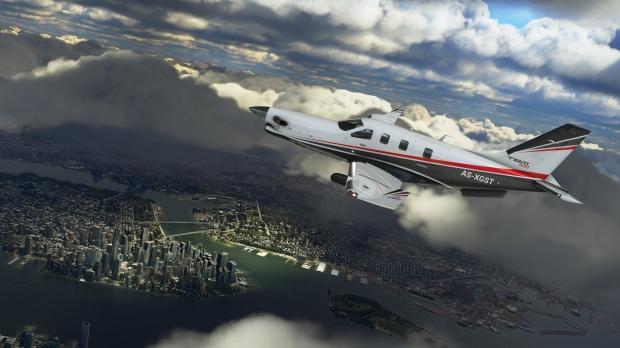