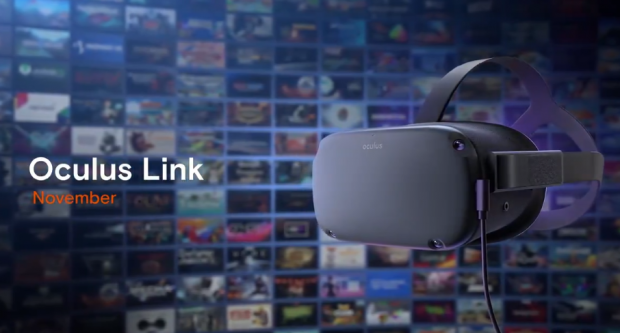 Oculus Link effectively makes the Quest into a mobile-tethered hybrid that can switch at will (and also effectively phases out the Rift).

We're not exactly sure on specifics, but it appears the Quest can now leverage the might of a gaming PC's dedicated graphics card and CPU tech. The Quest sports a self-contained system with a Snapdragon 835 processor and 4GB of RAM, meaning games on the device are somewhat limited. Now with Oculus Link, users can experience full VR gaming and interactivity without power limitations.

This marks another milestone in the VR space. Headsets are getting more compact, potent, and accessible with wireless technology, but now they're starting to be hybridized and swappable between mediums. Allowing connectivity via a single USB-C cord is a huge evolution of the 500 wires needed with a traditional Rift or Vive headset setup.

Oculus Link software will roll out in November and the company will sell its own proprietary USB-C cable to facilitate the connection.

"Oculus Link is a new way for people who own a Quest headset to access Rift content and experiences from their gaming PC. Starting this November, anyone who owns Quest and a gaming PC will have access to popular Rift games with Oculus Link software, which can be used with most high-quality USB 3 cables.

"For developers, this means it's now possible to build high-end PC games and experiences while taking advantage of the biggest possible market and connecting with new audiences as the Quest community grows. Oculus Link is truly the best of both worlds: the high-end gaming of Rift when connected to a PC, with the ease and portability of Quest on-the-go."