Toshiba has just unveiled the world's first PCIe 4.0-based enterprise SSDS at Flash Memory Summit 2019, with the new Toshiba CD6 and CM6 series SSDs use PCIe 4.0 lanes to drive speeds through the roof. 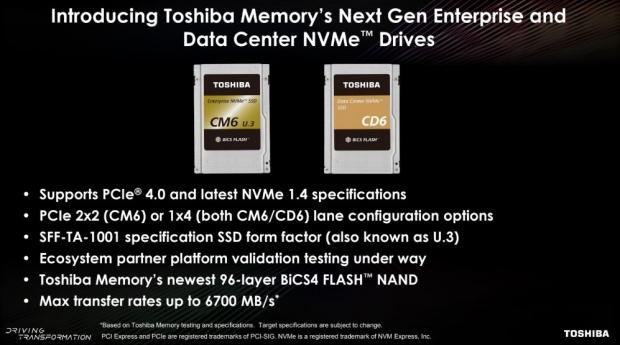 Mixed with Toshiba Memory's in-house and latest 96-later BiCS4 FLASH NAND we have up to 6.7GB/sec transfer rates. Yeah, 6700MB/sec. 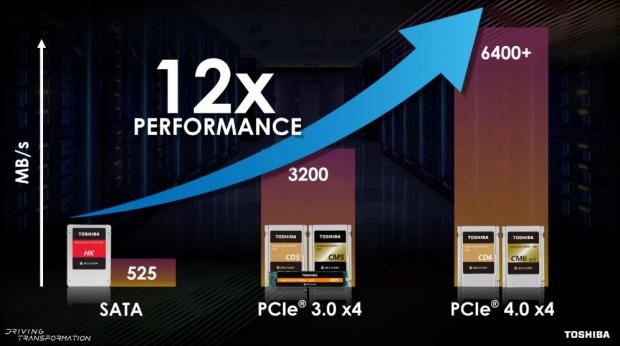 Toshiba's previous-gen CD5 and CM5 were based on PCIe 3.0 x4 lanes with max speeds of around 3.2GB/sec, so the lanes opening up on the PCIe 4.0 highway drive speeds at up to 6.7GB/sec is a huge win. Even more so when you consider it's a huge 12x speed improvement over the normal SATA drives at 525MB/sec (0.5GB/sec compared to 6.7GB/sec is huge).

The new CM6 and CD6 drives are offered in the SFF-TA-1001 specification SSD form factor, which is otherwise known as U.3 -- this provides more flexibility in the server space. The U.3 standard means you can plug in any flavor of SSD, meaning you can throw in super-fast NVMe drives into any SSD socket without much investment.