The Hubble Space telescope is nothing short of incredible, and today we have another breath taking image of two distant galaxies bound for a collision of beautiful cosmic doom.

The image was released by NASA on their Hubble Twitter account and it showcases an amazing display of two galaxies engaging in a cosmic level dance that will eventually result in their impending doom. Scientists have titled the collision UGC 2369, and we know that they will unfortunately collide due to the gravitational distortion of their shape and the bridge of gas that can be seen transferring from one to the other.

The galaxies are about 424 million light-years away, and according to the European Space Agency (ESA), "Interaction with others is a common event in the history of most galaxies. For larger galaxies like the Milky Way, the majority of these interactions involve significantly smaller so-called dwarf galaxies. But every few billion years, a more momentous event can occur." Take our galaxy for example, The Milky Way, at the moment we are currently on a 4 billion year collision course with our neighboring galaxy, Andromeda.

While this might sound terrifying to hear at first, solar systems such as ours will likely not be directly effected, and according to the ESA we will even be coined a new nickname - "Milkomeda". 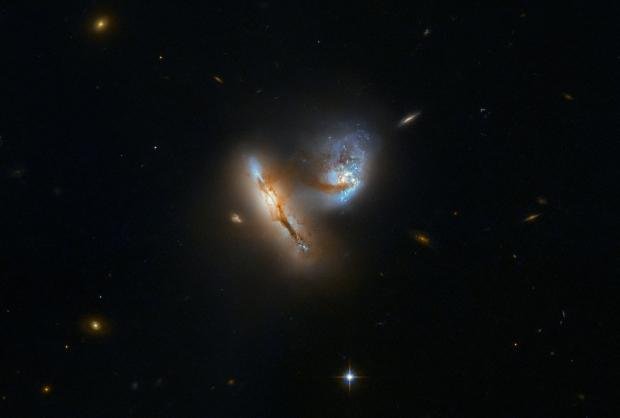 The Milky Way: An Insider's Guide