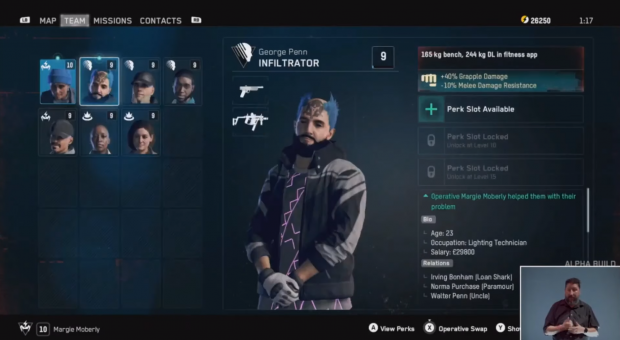 All of this sounds incredibly engaging and ambitious, and perhaps the most punishing but alluring part of Watch Dogs Legion is its permadeath system. The game is a lot like playing Diablo in Hardcore mode. When an operative dies, they're dead for good and you have to go out and find someone new. Ubisoft hasn't revealed what exactly happens when a teammate dies, ie if everything you put into that character is gone for good, but it definitely adds a sense of danger to the experience.

Ivanka Stefanov, who attended physiotherapy classes, gets a blanket +25% injury recovery speed bonus for all of your DedSec operatives.

Some characters even have passive bonuses that help your entire team.

Examples of how traits tie into a character's backstory:

"That's not accidental. Their traits and their stories are connected. That's derived from their backstories to make the simulation more robust."

Everyone has their own traits or unique boosts and debuffs straight out of a Fallout game. How these traits work depend on the person's backstory.

"Even beyond the class system, further customizing your characters the way you'd like to play, we have perks. So perks are different abilities that you can assign to that player for further customization. We have four available in the E3 demo today, but we'll obviously have a lot more in the full version of the game." 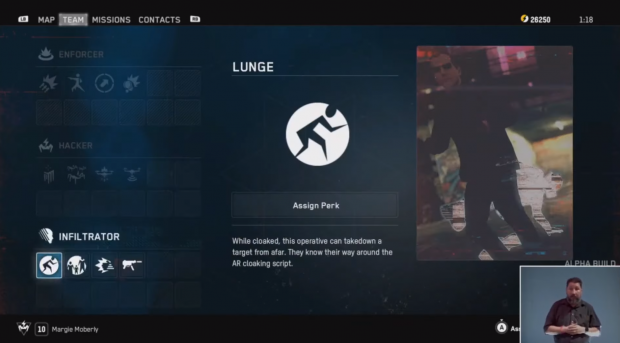 Every class has an upgrade path via perks, or passive bonuses that boost various things including the range, duration, and power of special abilities. Your team levels up over time as they complete objectives and do missions. 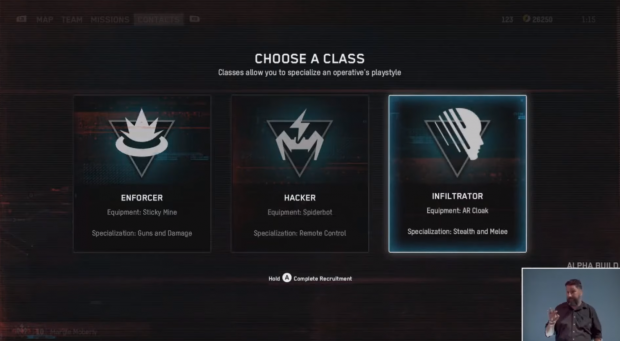 There are three different classes, each with their own unique special abilities:

"When you recruit a new operative you have the opportunity to select their class. This gives you a little bit more customization to not only play the characters you want, but play them how you want as well," Ubisoft said in a recent Watch Dogs Legion stream.

Every time you fold someone new into your operation you can assign them a class. Every person has their own traits, and its best to choose a close that aligns with their backstory. For example, a character who boxes could do well as Infiltrators that use melee and stealth. You're creating a dynamic tag-team of ruffians, hackers, old librarians and other citizens to form the ultimate rebel alliance. 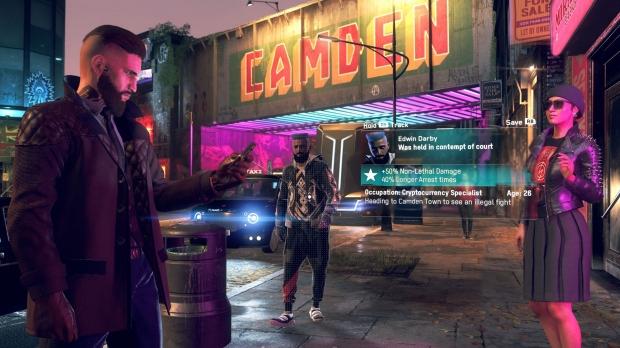 Watch Dogs Legion is perhaps Ubisoft's most ambitious game to date. Set in a high-tech post-Brexit London overrun by cyberpunk-style crime and private military corporations, the game lets you recruit and play as anyone in the entire city. Anyone and everyone you see in the game can join your hacktivist DedSec rebellion and dish out havoc to overthrow The Man. The real beauty is how Ubisoft executes this system with a layered and quite dynamic RPG structure.

E3 2019 - Watch Dogs Legion is an RPG at heart built around one singular concept: the entire world can join your party. Now Ubisoft shares more details on classes, perks, and character traits.