There's a very real anarchist feel to Legion and Ubisoft has tapped into something special here. The idea that anyone can become part of DedSec fits perfectly into the anti-establishment and anti-authority theme of rebelliousness with Legion.

Legion is definitely an action game in practice, but there's a lot of methodical planning that can go into how you execute your chaos in post-Brexit London. You'll be able to strategically plot out your team and equip them with specific weapons for maximum carnage, and fluidly adapt to harder missions that require you to use high-skill hacking or perhaps go in guns a blazing with an ex-special forces operative.

"There's this sort of cascading effect as you do actions and people remember them and they remember the things you do about other people," England said.

Every character has their own internal life; they have friends, they react to your decisions, and they even remember what you make them do. Ubisoft is pushing their character tech to a whole new level with Watch Dogs Legion. NPCs or enemies will react to decisions like slaying their allies. 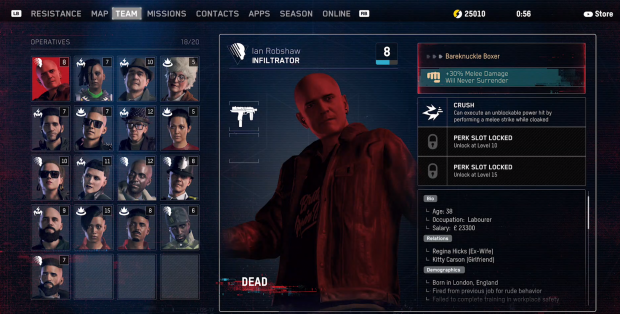 DedSec squads in Legion consist of 20 members. Teammates can die, and when they do players have an opportunity to fill that blank spot with someone else. This fuels a kind of constantly evolving gameplay that fits perfectly into Ubisoft's penchant for engagement-driven games.

"Once you bring someone onto your team you can continue to customize them. We have a full progression path for each character, you level up, you earn EXP, you install perks to change your gameplay abilities," said Ubisoft's Kent Hudson 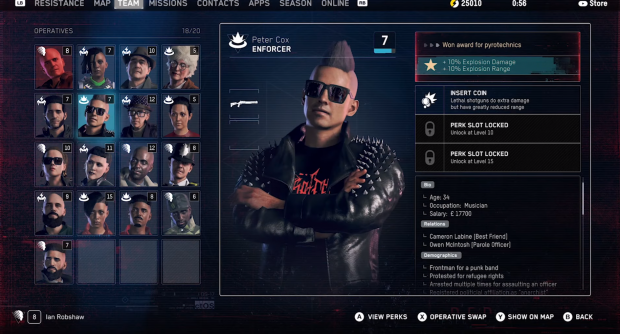 Ubisoft is very creative here and pulls out some cRPG-level trait action that reminds me of the original Fallout. For example, a character who specializes in pyrotechnics will get an explosive damage bonuses, and someone who overdosed on adrenaline will do more damage with less health, but overall has less HP. Using this system players can mix and match their squad at will, cherry-picking their favorite characters to try dynamic and always-changing teams.

Every single character in Watch Dogs Legion has their own randomized skillsets and passive bonuses that tie neatly into their personalities and backstory. Each profile has been dramatically expanded with various RPG-level buffs. 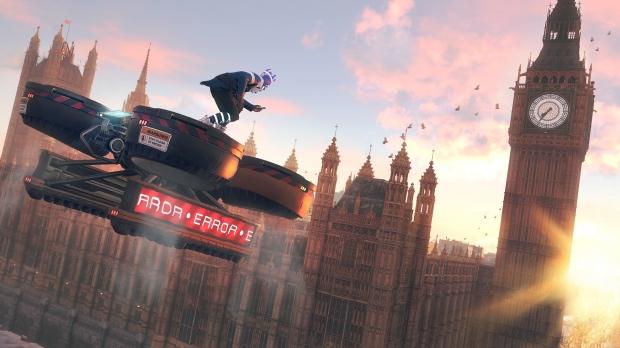 Watch Dogs Legion lets you recruit anyone in the entire game. Anyone you see walking around the dystopian sci-tech city of London can be recruited as a DedSec member. Once folded into your team, these characters can be managed, buffed, and assigned specific roles. Like party members in an RPG, your DedSec squad can level up, equip weapons, and unlock new perk bonuses to boost efficacy in missions and combat scenarios. The beauty of Legion is that everyone in the entire game can join your party.

E3 2019 - Just like with Assassin's Creed: Odyssey, Ubisoft is infusing deep RPG mechanics into its next big Watch Dogs game.