Apple launched its new Mac Pro and inside the machine that will cost up to $50,000 was the surprise release of the new Radeon Pro Vega II and Radeon Pro Vega II Duo graphics cards from AMD. Both of these new cards are based on the Vega GPU on the new 7nm node.

The new Radeon Pro Vega II and Radeon Pro Vega II Duo graphics cards are not for gamers in any shape, way or form -- they are pure workhorses that are perfect for professionals that need crazy amounts of GPU horsepower. Tasks like video editing native 8K resolution content, rendering, and other compute-intensive tasks the Vega 20 GPU on 7nm with 32GB of HBM2 per GPU is up to the task.

In the new Mac Pro they can be used in 4-way GPU setups so there's a total of 4 x Vega 20 GPUs on 7nm with 128GB of total HBM2 memory at your disposal all at 1TB/sec across its 4096-bit memory bus. The GPUs are connected through AMD's own Infinity Fabric, with 84GB/sec of bandwidth through the Infinity Fabric link.

We also have an all-new PCIe connector being used on the Apple Mac Pro, providing up to a huge 475W of power per card. 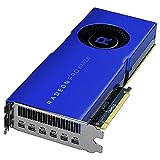