AMD has just confirmed that its new Navi GPU will be coming in Q3 2019 on the exciting new 7nm node, and will sit alongside the Radeon VII at the higher-end of the scale. 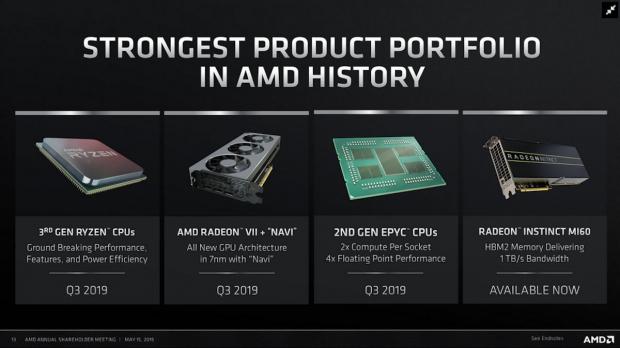 The company confirms that we'll also see the 3rd-gen Ryzen 3000-series CPUs on the new Zen 2 architecture also on 7nm, as well as the next-gen EPYC 'Rome' CPUs on 7nm with the huge 64C/128T of power. The current-gen Vega-based Radeon Instinct MI60 stays on the roster and is available now with over 1TB/sec of memory bandwidth thanks to its HBM2 memory.

AMD explains: "In gaming, we successfully returned to the high-end market with the launch of our Radeon VII GPU in February 2019 and we are on track to introduce our next-generation "Navi" GPUs for the mainstream market later this year".