UPDATE: Hello Games confirms No Man's Sky Beyond will bring free VR to PC players too via Steam VR.

Hello Games wasn't kidding when they said No Man's Sky Beyond would deliver "radical new ways to explore the universe."

No Man's Sky's cyclopean new free expansion Beyond not only brings a huge overhaul to the space sim's online mode, but a feature we've wanted to see for a long, long time: VR support. During its new State of Play stream, Sony today announced that No Man's Sky Beyond will include PSVR support when it launches in Summer 2019.

VR mode will also include online play, too. Players will be able to team up with their friends and go gallivanting across the stars in a new immersive way. The announcement trailer confirmed PSVR is compatible with No Man's Sky's construction mode as well as free play. Sean Murray confirms the game natively supports VR for every single mode of play.

"The team has worked so hard to make this a true VR experience rather than a port," Murray said in a PlayStation Blog post.

"Grab the joystick and thruster to fly your starship over an unexplored alien planet as you peer out of the cockpit at the view below. Reach into your backpack to grab your multitool, touch it to switch to terrain manipulation, and carve out intricate shapes with unprecedented control. Play in multiplayer and casually wave to your non-VR friends or fist bump your PS VR peers.

"No Man's Sky VR is not a separate mode, but the entire game brought to life in virtual reality. Anything possible in No Man's Sky, NEXT or any other update is ready and waiting as an immersive and enriched VR experience."

No Man's Sky Beyond will also bring VR integration to PC too on the HTC Vive via Steam VR.

No Man's Sky Beyond is the seventh major free expansion Hello Games has released for the game, and is slated to release Summer 2019 on all platforms. 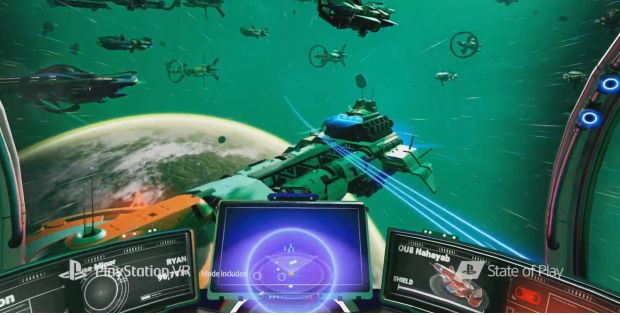