Resident Evil 2 Remake is getting a demo on all platforms later this week, and it should be pretty stressful (but in a good way). 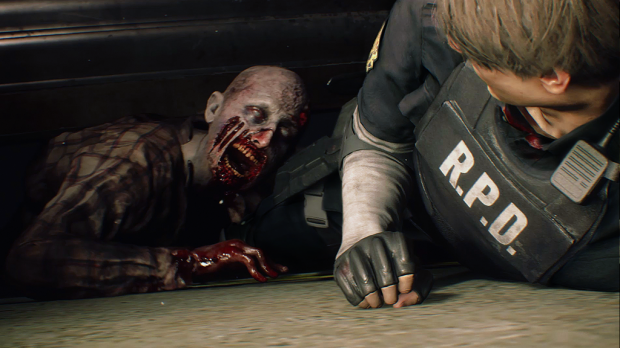 Today Capcom announced RE2make's 1 Shot demo, a short but deliciously sweet slice of the remake's zombie-slaying horror. The demo is open to everyone (no pre-order needed) and has a stressful countdown clock that sees players scrambling for survival and adapting to Raccoon City's bloody chaos. After 30 minutes of play you're locked out of the demo, adding more thrill to the experience by forcing you to make every second count.

Insofar as content, the demo will resemble the gameplay shown off at E3 2018 and takes place in the Raccoon City Police Department, complete with remastered visuals built with the latest REngine technology. It'll drop this Friday, January 11, 2019 on PS4, Xbox One and PC.

"Once those thirty minutes are up, so is your demo! Fortunately, you can continue if you die, or if you complete the mission objective. However, just like in real life, you can't turn back the clock and you won't be getting back the time you lost, so use what time you have wisely," Capcom wrote on a Unity post.

The full Resident Evil 2 Remake game is slated to release on January 25, 2019 on all platforms.

"Based on the original genre-defining masterpiece, the new game has been completely rebuilt from the ground up for a deeper narrative experience. Using Capcom's proprietary RE Engine, Resident Evil 2 offers a fresh take on the classic survival horror saga with breathtakingly realistic visuals, heart-poundingly immersive audio, a new over-the-shoulder camera, and modernized controls on top of gameplay modes from the original game."

The genre-defining masterpiece Resident Evil 2 returns, completely rebuilt from the ground up for a deeper narrative experience. Using Capcom's proprietary RE Engine, Resident Evil 2 offers a fresh take on the classic survival horror saga with breathtakingly realistic visuals, heart-poundingly immersive audio, a new over-the-shoulder camera, and modernized controls on top of gameplay modes from the original game. The nightmares return reimagined for the PlayStation 4, Xbox One and Windows PC on January 25, 2019.

In Resident Evil 2, the classic action, tense exploration, and puzzle solving gameplay that defined the Resident Evil series returns. Players join rookie police officer Leon Kennedy and college student Claire Redfield, who are thrust together by a disastrous outbreak in Raccoon City that transformed its population into deadly zombies. Both Leon and Claire have their own separate playable campaigns, allowing players to see the story from both characters' perspectives. The fate of these two fan favorite characters is in players hands as they work together to survive and get to the bottom of what is behind the terrifying attack on the city. Will they make it out alive?