Update: Intel emailed me overnight, pointing me to a tweet where they said: "Media reports published today that Intel is ending work on the 10nm process are untrue. We are making good progress on 10nm. Yields are improving consistent with the timeline we shared during our last earnings report".

Intel has been having troubles with its new 10nm process node for years and years now, and in the days after the launch of the Core i9-9900K, a new report has surfaced saying that Intel has killed off its 10nm process. 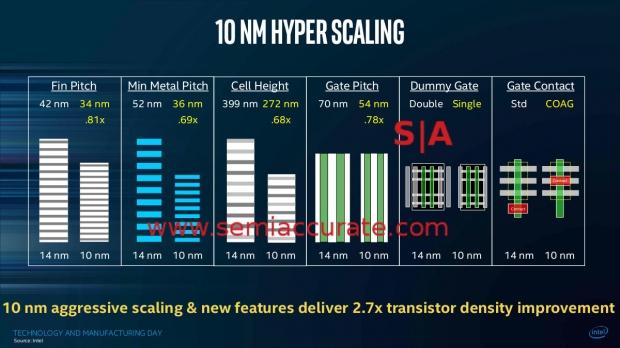 SemiAccurate is reporting that they have just learned "Intel just pulled the plug on their struggling 10nm process". The full story requires a professional level subscription to the website, but Charlie does tease us with "The knifing of 10nm shows that Intel is finally willing to do the right things for the right reasons even if it costs them some short term pain, it is the first adult decision we have seen from the company in several years. Let us walk through the reasons why it is a good thing, from cost to timetables to competitiveness to management changes to potential product roadmaps. It is not a clean, easy or pithy story to pull a sound bite from but it is interesting".

Until now, Intel was expected to launch its 10nm back in 2015, but delay after delay saw the rise of the 14nm, then 14nm+, then 14nm++, and then the quick release of mobile SKUs of 10nm CPUs. The full consumer push for 10nm was then pushed back every few months by another 6-12 months, with an eventual launch in late-2019. Charlie's new report sees Intel abandoning 10nm altogether, which makes sense considering the number of issues they're having getting it up and running.

AMD will be launching its huge 7nm launch with new EPYC processors in 2019, and a next-gen Zen 2 architecture right around the corner, all while 7nm GPUs will be unleashed in the form of Vega 20 inside of the new Radeon Instinct accelerator. AMD is about to jump leaps and bounds ahead of Intel when it comes to process node leadership, but with Intel's 10nm node reportedly axed... what's next?