Code Vein looks like a rather interesting game that melds J-RPG visuals with fast-paced dodge-and-slash action combat from a Dark Souls game. Internally described as a "dramatic dungeon-exploring action RPG," Code Vein features online co-op and will take players across a world riven with chaos and monstrosities. The combat itself will be blistering and fluid, and gamers will have a fair bit of exploration to tackle throughout their journeys.

Featuring a story driven connected dungeon experience, dive into the world of CODE VEIN. Create your own character and choose your partner as you venture out into a world of destruction, overrun by the Lost. Use your combined strength to coordinate your approach and defend each other from surprise attacks or overpowered enemies using your Blood Veil and various weapons. Change the feel of the game depending on which partner you choose, each with their own combat style and background story.

Experience the power of blood as you use unique Blood Veils to drain your enemies to enhance your abilities. Using "Gifts" powered by enemy blood, players can increase their strength, weaken enemies, and utilize new weapon abilities and overpowered attacks.

Take on the Lost as you explore the malefic world of CODE VEIN. Choose from a myriad of weapons such as bayonets, axes and spears, to accommodate your favorite battle style. Apply strateg

"In the not too distant future, a mysterious disaster has brought collapse to the world as we know it. Towering skyscrapers, once symbols of prosperity, are now lifeless graves of humanity's past pierced by the Thorns of Judgment.

"At the center of the destruction lies a hidden society of Revenants called Vein. This final stronghold is where the remaining few fight to survive, blessed with Gifts of power in exchange for their memories and a thirst for blood.

"Give into the bloodlust fully and risk becoming one of the Lost, fiendish ghouls devoid of any remaining humanity. Wandering aimlessly in search of blood, the Lost will stop at nothing to satisfy their hunger. Team up and embark on a journey to the ends of hell to unlock your past and escape your living nightmare in CODE VEIN." 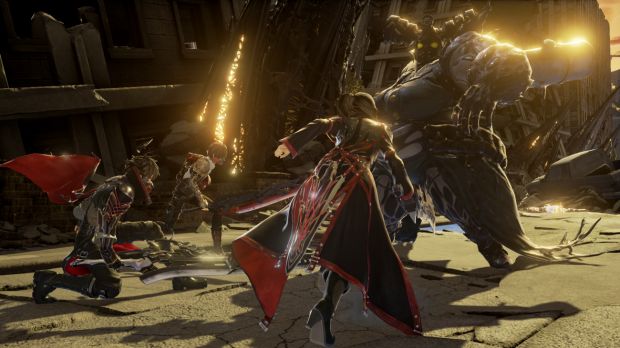