E3 2016 -- I'm kind of old school. When someone drops the phrase "music visualizer" I'm reminded of pulling up Winamp on my Windows XP machine, firing up some Crystal Method, and unleashing those full screen trippy visuals. Well, VR is going to change the game for people who like to trip out or just relax with their music, and Harmonix seems a good choice for the company to execute it. 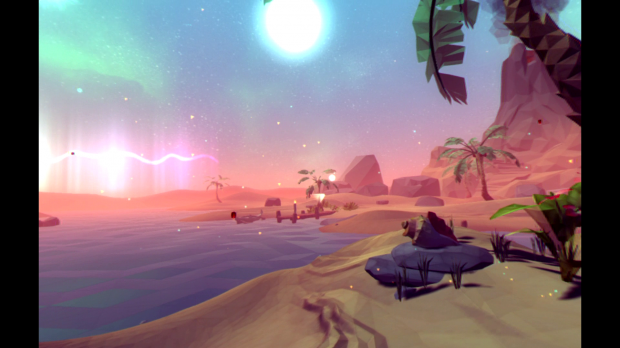 The motivation for Harmonix Music VR was the company's desire to help people better appreciate music through virtual reality. Some of what's waiting for you is passive, and some is interactive.

I had about 30 minutes with Harmonix Music VR during E3 this week, and here are my quick impressions of 4 of the experiences on offer when it releases alongside PlayStation VR on October 13th. 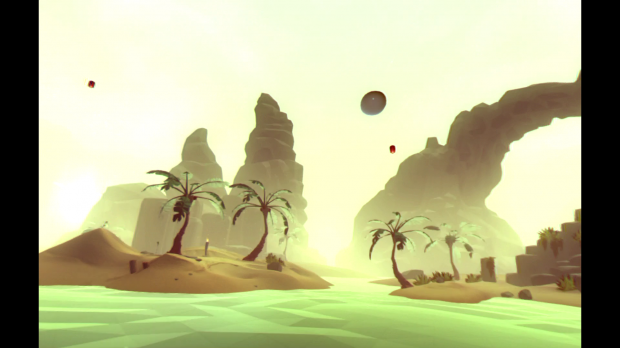 The Beach is your slice of virtual solitude to just chill out and explore an interactive environment that visualizes 17 Harmonix compositions, or any of your favorite tunes sitting on the PS4's hard drive. Weather and scenery changes dynamically with different song changes. 3 explorable locations, and each location has 3 mini-visualizers to check out. So if you gaze at a seashell for a few seconds, a self-contained visual will emerge from it and you can enjoy that. To disengage from that visual, just look away. 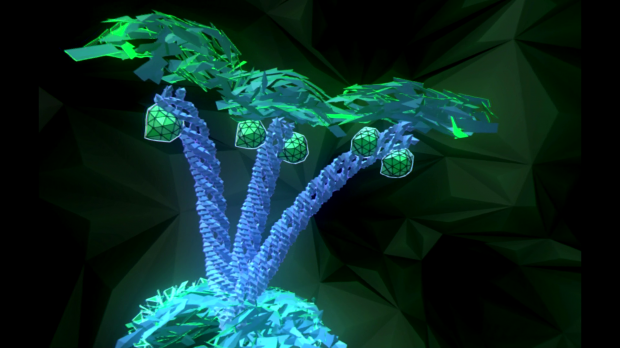 This stage gives you a blank 3D, 360-degree canvas to create, paint, sculpt, or just experiment on. It'll instantly remind you of Google's Tilt Brush on the HTC Vive, but Music VR one-ups it by adding reactive music elements, allowing you to essentially construct your own visualizer or just chill out and create drawings or get expressive alongside your favorite music. You use the right Move controller to physically paint, and the left one to reposition the creations in 3D space, or to bring up a series of menus to select paint brushes, stamps, and loopers. Loopers are a trip because these visualize the music, and repeat whatever you do after every bar.

Harmonix spoke to several artists who lean on music to get into a creative headspace, and The Easel produced this magical feedback loop for me that, even though I'm not remotely an artist, I could let go and just play, watching my squiggles and structures pulse along with my favorite songs. 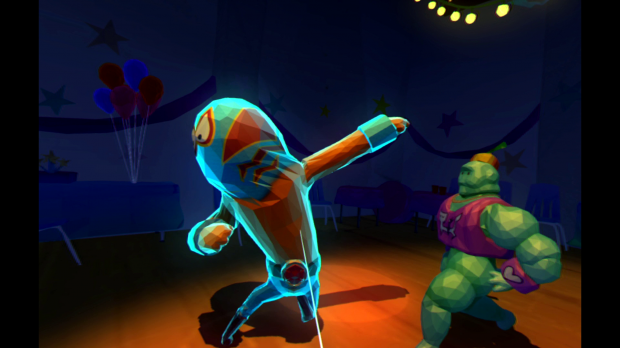 Dancing is the oldest form of music visualization, and this experience was pure joy. I found myself giggling as I choreographed dance moves for a bunch of silly monsters, or teleported up to the DJ booth to scratch the vinyl, blow an air horn, or use a party gun to shoot toilet paper or various objects onto the dance floor. Or zoom into the heavens and fling those wacky little monsters into outer space.

What made me giggle like a fascinated child was grabbing various rings around the monster's body parts, and flapping my arms or head to teach it a move for that section. Then when I released, they repeated that action, no matter how stilted or, in my case, absurdly animated it was. I was bringing them to life, choreographing the party. I'd imagine you could choreograph actual dance moves, but since I don't know any, my monsters flailed around like muppets on a caffeine high. I was perfectly fine with that!

I don't know if The Dance will have lasting appeal, but it will undoubtedly end up being one of PlayStation VR's showpieces. That game you show to people who've never tried VR, or the one you bust out at parties when everyone's ready to get silly. 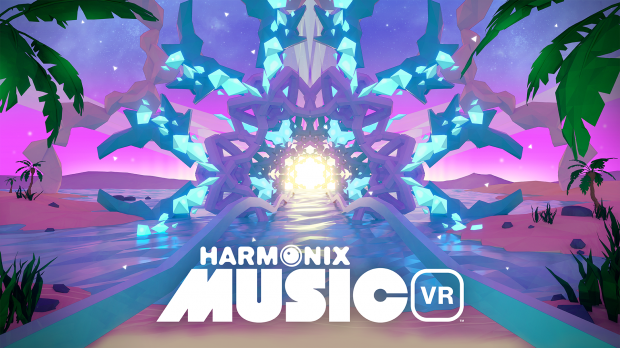 The Trip most resembles that classic music visualizer. This is old-school Winamp brought to life, and you're inside it. Again, choosing any piece of music or audio, you sit back and travel slowly through kaleidoscopes of color bursting and morphing around you. It was visually stunning, but there was one minor setback.

The Trip is actually the 2nd seated PlayStation VR experience to make me slightly uncomfortable (the first being RIGS). Not nauseous, not outright sick, but sweaty and uneasy. I'm not sure if it was sensory overload or simply the slow movement through the space without any physical real-world movement to match, but I could only enjoy it for a few minutes before bouncing out.

I'll stress that I everyone reacts differently to movement in VR, so don't take this as an indication that it will make you uncomfortable.

As a complete package, Harmonix Music VR shines a light on what PlayStation VR is capable of, and would even make a great bundled title. Mark my words, though, people are going to get high and do this. But I quite enjoyed it perfectly sober.