In preparation for the incoming DOOM open beta, Bethesda has just revealed a glimpse at all the awesome armor and item unlockables that DOOM's multiplayer has to offer, and they're pretty impressive.

According to the latest Bethesda.net post, DOOM's multiplayer is going to offer Halo-like player customization options with tons of different armor permutations to choose from.

Here's how DOOM's multiplayer progression works: you'll get EXP just from playing, and bonus EXP based on your performance--getting the most kills, saving teammates, being the game's MVP, etc. That EXP is spent on unlockables including armor sets, weapons, equipment, hack modules, and custom additions like paintjobs and the like. There's over 300 armor pieces in the game, with five base armor sets--UAC, Demonic, Bounty Hunter, Templar and Utilitarian--all of which have their own striking appearance.

Apart from weapons and armor, players can also unlock Hack Modules. These items give players a small boost to help even the odds in multiplayer, and come in three tiers. Everyone will get two hack modules after completing every match. Here's the low-down on some of the hack modules and what they do:

The final piece to your DOOM multiplayer arsenal is Equipment. These special items compliment any loadout by adding a range of destructive off-hand extras like frag or siphon grenades. Equipment isn't just about dishing out damage, though: players can unlock helpful defensive perks and abilities like the Shield Wall, which protects players against front and back damage, and can even create a barrier over a doorway.

Equipment has a cooldown timer that's reset after you die--think Destiny's grenades or melee abilities.

Be sure to jump over to the blog page for more info on DOOM's multiplayer mechanics, and based on what we know so far, the game is going to be quite chaotic when it launches on May 13. 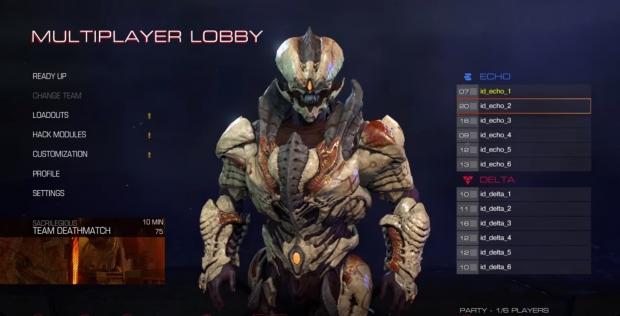