65daysofstatic, a UK based instrumental band is going to be releasing their first original soundtrack, No Man's Sky: Music for an Infinite Universe on June 17th, coinciding with the release of one of the most anticipated sci-fi space simulators ever, No Man's Sky.

No Man's Sky is too big a production, and hyped way too much, to get just a normal soundtrack to be the backdrop for the vast, open, procedural generate masterpiece that it is. They've partnered with a UK instrumental band, 65daysofstatic, to produce a unique soundtrack that could only be good enough to grace your ears while exploring the space-lanes. Hello Games chose 65daysofstatic as their composers of choice after one of their singles, Debutante, was featured in the reveal trailer in 2013. Since then they've been hard at work composing the original music that'll be featured in-game.

The soundtrack is a bit unique when compared to other's of similar origin, in that it follows some of the similar practices of the procedural generated world that it'll be accentuating. They've compiled over two hours of music across 10 individual tracks, alongside a vast library of raw audio comprised of loops, sound textures and unique melody that currently being fed into the game's unique music engine, effectively creating a self-generating soundtrack that can mix itself into infinity.

They won't be finished with the soundtrack until the game releases, and will be working up until then to ensure there's enough that No Man's Sky can move away from the typically soft, ambient music that you sometimes see in procedural generated games. Instead, they want to be able to transition effortlessly between the minimal, barren melodies of outer space to the intense scenes of battle ripping through space.

Just like the game, they want the soundtrack to be similarly unique, something that adds to the full experience of the game, able to help draw you into the monumental universe inside. 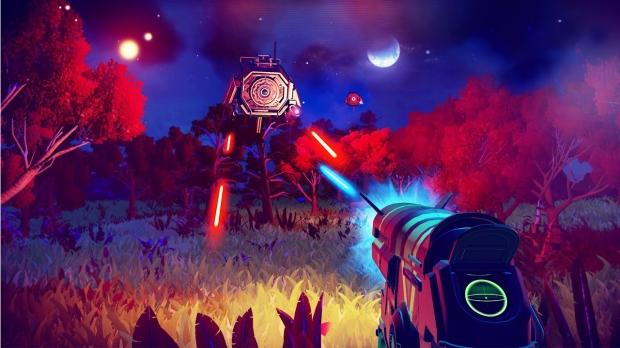