Up until now, No Man's Sky has been quite a mystery. When the game was revealed it built up tons of hype, but as time went by, myself and tons of other gamers started getting nervous. We had so many questions, and hardly any of them were getting answered. Luckily, Hello Games has blown the lid off of No Man's Sky and peeled back the game's many layers to reveal the juicy tidbits within. 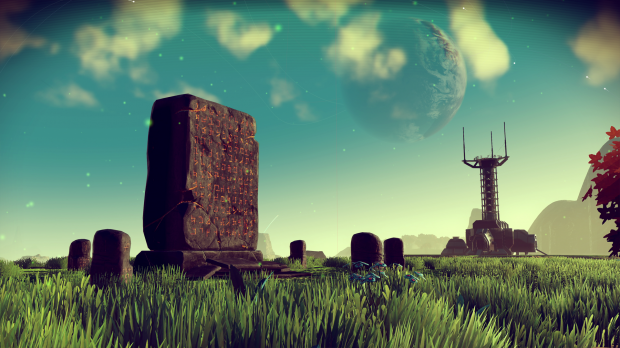 Hello Games recently let various press outlets try out No Man's Sky, and while we weren't selected for the demo tests, we can still glean a ton of info from the coverage. As a die-hard fan of the game, I'm quite curious to find out what exactly we can do in the game, and I decided to put together this list.

By no means is this a definitive or comprehensive charting of the game's full content--it's meant to be a guide more than anything, so you can get an idea of the scope of No Man's Sky.

"You can trade, you can fight, you can explore, you can survive. It's a giant sandbox - a universe-sized sandbox. Nowhere out there is there a FAQ to show me where things are."

Multiplayer is more of a 'Dark Souls or Journey' type of thing, but the game's mostly singleplayer - No Man's Sky is an intimate experience that isn't driven by multiplayer. We don't know the exact specifics, but it sounds like there's one persistent huge universe that's shared by all players, but it's so big you won't hardly ever bump into anyone else.

"I guess we've always downplayed multiplayer because it's not really a multiplayer game. Actually, the experience is reasonably solitary. But we want you to feel like you're playing in a shared universe, and I think it's important to have those moments. 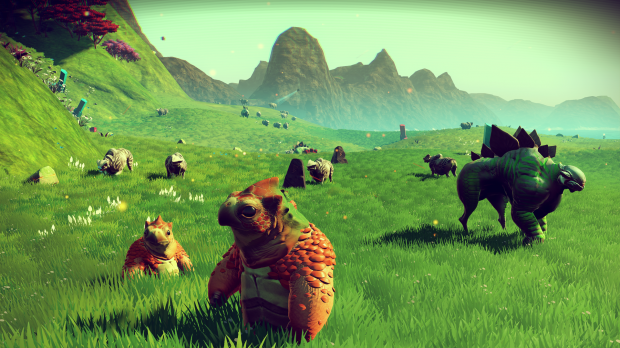 The developers want gamers to feel as if they've stepped into a sci-fi book cover - Sean Murray told IGN that No Man's Sky is built around the same feeling you get from gazing upon a truly amazing sci-fi book cover. The visuals have old-school blurred distortion lines reminiscent of nostalgic sci-fi movies, along with a vibrant palette that paints every planet. The game reminds me of artwork from Ralph McQuarrie, or maybe John Berkey.

There's a 1970's-style sci-fi soundtrack - No Man's Sky isn't just a feast for the eyes. The game is complimented by a retro soundtrack that fully embodies the mystique of 1970's sci-fi magic.

There's no mini-map - Hello Games wants exploration to feel as natural as possible, so they took out a mini-map. "Since no one has been here before, the mini-map shouldn't exist," Murray said. Wow...just wow. That's epic.

There are no loading-times - Gameplay is forever in real-time, meaning No Man's Sky won't have any loading zones. That's pretty amazing given how massive the game is and how many different planets there are to explore.

Skill and gear upgrades are non-linear - Sean Murray affirms that players will be able to fully customize skills and upgrades in any order. "I can upgrade everything about myself. It's kind of a non-linear RPG. You can upgrade your tech tree in whatever way you want." 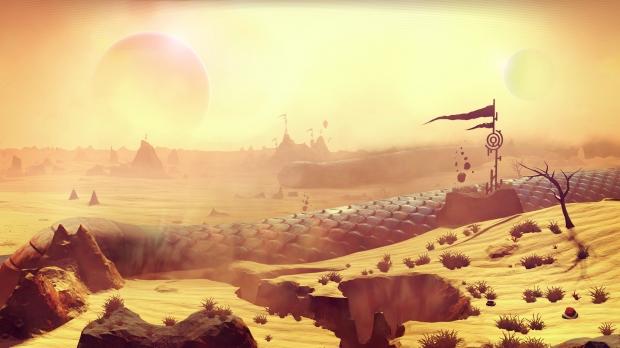 It's classified as a "survival sandbox game" - No Man's Sky is all about exploration, but survival plays heavily into the framework as well. Planets will often be extremely inhospitable with subartic temperatures or toxic atmospheres, and players will need to build up their biosuits to adapt to different regions.

Your main objective is to journey to the center of the universe - Until now, we didn't know the game's main objective, but according to Nerdist, it's all about traveling to the farthest rims of space.

Changes you make to a planet are permanent - When you land on a planet, anything you do to the world is permanent. You'll be able to use your gun to zap away rocks or create makeshift dwellings to protect against hazardous weather, or dig to unearth sub-levels--possibly as deep as the planet's core. If you dig a hole like a worm through an apple, that hole will be forever locked into the planet, adding a whole new depth to the game.

No Man's Sky is so big, you'll most likely never encounter other players - This game is an intimate one-player journey across the cosmos. It's scaled in such a way that it adequately reflects the universe, meaning players could play for years at a time and still never meet. 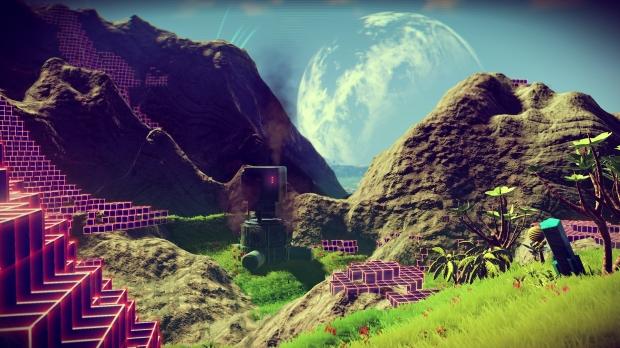 If you strip too many resources from a planet, you'll be punished - While players will be able to mine a bunch of different materials from planets, there's a limit to what you can safely harvest. Strip too much from any given planet, and tiny robots will come out to fight you--not unlike the Sentinels found on the Halo arrays.

There's a pulse beacon that marks your ship's location - If you wander too far from your ship, you can actually enact a pulse beacon that outwardly scans environments and places indicators on your HUD. We're not sure if the pulse will only find your ship, or if it'll mark other things like visited areas, custom waypoints, or dangerous enemies.

No Man's Sky takes on a first-person shooter scope during planet exploration - Malik Forte at the Nerdist says that FPS players will feel right at home in Hello Games' space sim. The control scheme is pretty much like every FPS on the market, and gameplay retains that distinct shoot-or-die first-person shooter attitude. 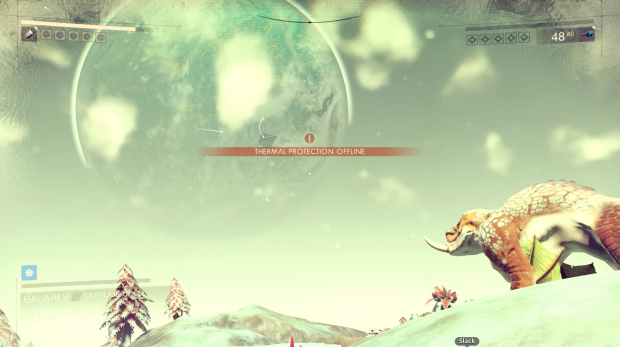 You get a jet pack while exploring planets - Yes! I absolutely love jetpacks, and every space exploration game should have them. You'll be able to lift into the skies for brief periods while on a planet's surface, which could be super helpful if you need to scale a mountain or quickly avoid hostile animals.

There are aliens in the game, and you'll have to learn their languages - You won't be the only sentient life form in No Man's Sky; planets are teeming with different alien species, all of which vary in personality, technology, and cultural trails. Each race of aliens speaks a different language, and players will have to learn and decipher linguistics to communicate. 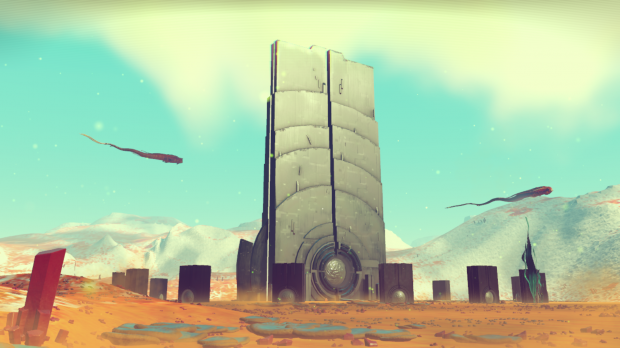 Planets are actually planet-sized - Every planet is different--some are small, others big--but they're all scaled in such a way that you can spend hours and even days just walking their surface.

Every planet is layered like an onion - It's not just about what's on the surface. Every planet has substrates, and some are deeper than others to offer more exploration. These layers can hide exotic resources and even more exotic creatures waiting in their depths.

Store kiosks are peppered throughout the galaxy - While there are alien-manned storefronts, you can also uncovered digital kiosks that allow you to buy and sell goods. Here you'll be able to buy resources for upgrades, or even whole ships for future adventures.

Interstellar space combat is like dogfighting amidst the stars - The other half of No Man's Sky is spent in beautiful nebulae-strewn eternity of space, which is just as alive as every single planet. Players will encounter pirates as well as military-class ships across their journey, and take on deadly odds in Star Wars-style space dogfighting. Of course, you'll want to make sure your ship is upgraded before you take on the military... 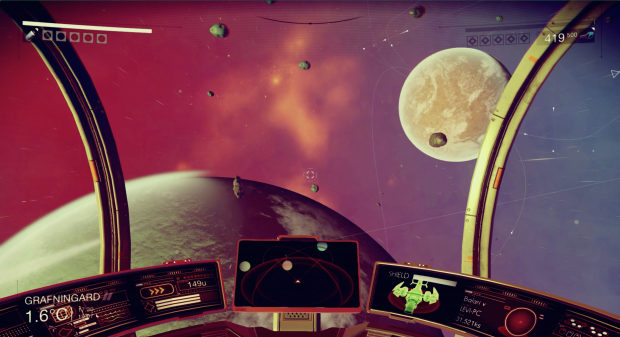 So there you have it! We hope this list has answered some of your burning questions on No Man's Sky, and remember that there's a ton of stuff we haven't covered. The game is absolutely massive, and after compiling this info, my faith is restored in the game.

No Man's Sky is slated to release on June 21 on PlayStation 4 and PC, and pre-orders are now live along with a few collector's editions.