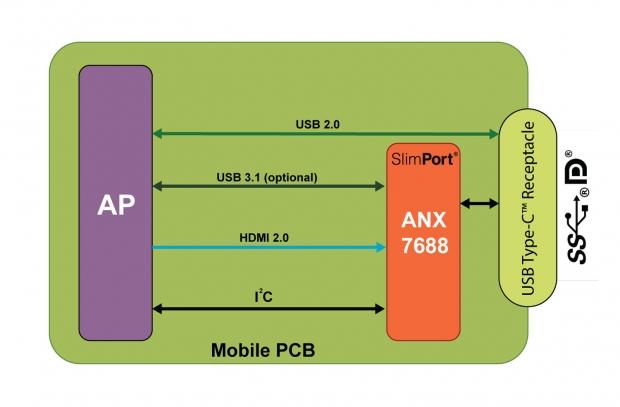 Analogix has created the SlimPort ANX7688 with Qualcomm-based USB-C smartphones and tablets in mind, as it converts the HDMI and USB interfaces to DisplayPort. This is done with Analogix integrating a converter bridge, a high-speed mux, USB-PD support for fast-charging, and the latest HDCP 2.2 content protection. Andre Bouwer, VP of Marketing for Analogix, explains: "ANX7688 puts Analogix years ahead of the competition to enable DisplayPort over USB-C capability on smartphones and tablets".

Bouwer continues: "Besides enabling big screen connectivity, SlimPort video out makes smartphones AR- and VR-ready in anticipation of head mounted displays moving into the mainstream, enabling an ever growing range of experiences for entertainment and productivity".