Intel had a massive area in the main hall of the Las Vegas Convention Center at CES this year. And they had a tremendous amount of technology to show off as well. One of the big things for Intel this year, is that of their Real Sense technology. They're very excited about it and have plenty of design wins to bring it to the masses.

They showed off Razer's new Stargazer camera, having a popular streamer sitting there actually playing live against three others. They showed how the dynamic background removal worked, and we were pleasantly surprised with it's effectiveness.

But there were other uses for Real Sense as well, such as with a gigantic interactive all where you could coax a school of fish into moving by simply using your hands. It was all quite impressive, though perhaps in the way that tech demos sometimes are. I can see the validity of the technology and where it can be useful for interacting with, well, anything. But hopefully companies, museums and even aquariums adopt Real Sense, because it could be another type of revolution that we never knew we needed. Razer is helping to show us that there are uses for the technology aside from 3D modeling your face.

In the end, though, it was fascinating at its core but perhaps a bit underwhelming. It's a burgeoning technology that can be useful, if it finds an appropriate niche. Intel is pushing hard, however. 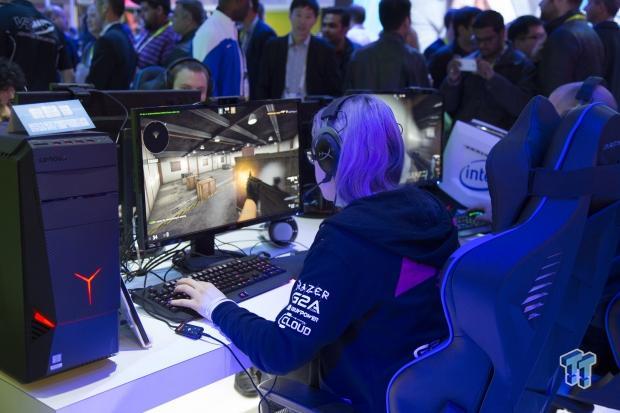