CES 2016 - I'm a huge fan of LinusTechTips, watching virtually all of their videos as soon as they're released, but their latest project is something truly glorious.

The guys at LTT built an insane $30,000 gaming PC that is capable of driving 7 different PCs, each with their own 3440x1440 UltraWide monitor, keyboard, and mouse. The 7 systems run as separate virtual machines, each rocking an Acer Predator X34 monitor (Linus and I have impeccable taste when it comes to 21:9 displays) with the beasty system featuring AMD Radeon R9 Nano cards.

The system itself is powered by two Intel Xeon E5-2697 processors, each with 12 cores (24 if we take into consideration Hyper-Threading), which provides the equivalent of a quad-core CPU per user. The motherboard of choice was an ASUS Z10PE-D8 WS, with an insane 256GB of DDR4 RAM (8 x 32GB sticks) and 8 x 1TB SSDs. An EVGA T2 1600W PSU was used, with the entire PC housed inside of a CaseLabs Mercury S8.

Linus worked together with Kingston on the PC, with the company showcasing it at their booth during CES 2016. 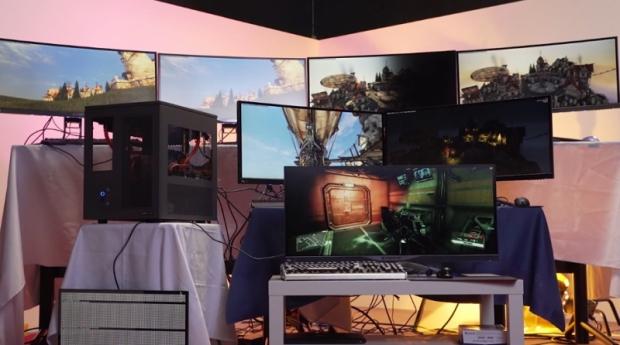