SAPPHIRE Is preparing a new Radeon R9 Fury Nitro card, something that will be a slight step up on its R9 Fury Tri-X. SAPPHIRE's new R9 Fury Nitro will feature a custom PCB, and so much more. 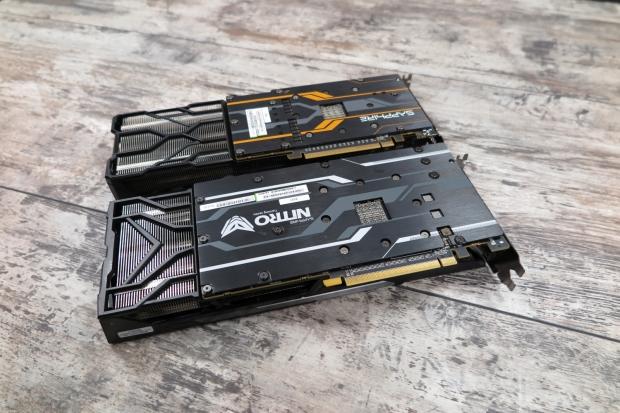 The Fiji PRO GPU will reportedly be clocked at 1050MHz, with the card being a little longer than the current R9 Fury Tri-X model - the Nitro measuring in at 307 x 125 x 45mm, while the Tri-X model measured in at 300 x 110 x 400mm. SAPPHIRE will allowing the R9 Fury Nitro to expand a little wider too, moving to a 2.5-slot card, versus a 2.2-slot card from the Tri-X model. SAPPHIRE's new Radeon R9 Fury Nitro will still use 2 x 8-pin PCIe power connectors, but the custom PCB can be seen as significantly larger than the Tri-X model - so expect some higher power draw on the Nitro.

This means we can hope for some decent overclocking on the SAPPHIRE R9 Fury Nitro, and if SAPPHIRE has been provided approval by AMD for overclocking the Fiji GPU, that means other AIB partners can't be too far behind. The R9 Fury Nitro will still rock the same 3584 stream processors, 4GB of HBM1 on a 4096-bit memory bus providing 512GB/sec of memory bandwidth. The 2 x 8-pin PCIe power connectors will require 275W of power. The R9 Fury Nitro will include 3 x DisplayPort, 1 x HDMI and 1 X DVI-D (compared to the Tri-X which had the same display output configuration, minus DVI). As for pricing, that's TBD for now.