To celebrate this week's release of the last film in 'The Hobbit' trilogy 'The Battle of the Five Armies' on Blu-ray HD, 3D Blu-ray, DVD and digital, we have three awesome Blu-ray prize packs to give away to readers - consisting of a Blu-ray, T-shirt, Notepad, Cap, Mug, Bag and keyring - all thanks to our awesome friends at Warner Bros Entertainment Australia.

'The Hobbit: The Battle of the Five Armies' brings to an epic conclusion the adventures of Bilbo Baggins (Martin Freeman), Thorin Oakenshield (Richard Armitage) and the Company of Dwarves. The Dwarves of Erebor have reclaimed the vast wealth of their homeland, but now must face the consequences of having unleashed the terrifying Dragon, Smaug, upon the defenseless men, women and children of Lake-town. 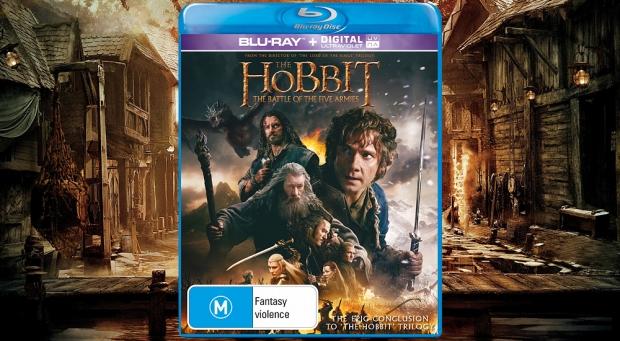 In what year was J.R.R. Tolkien's original novel 'The Hobbit' released?

'The Hobbit: The Battle of the Five Armies' is available on Blu-ray HD, 3D Blu-ray, DVD and digital from Australian retailers from March 26th.