Well, any network you're on has now been put to shame thanks to researchers from the University of Central Florida and Eindhoven University of Technology, who have worked together to completely blow away the world speed record for data transmission over a fiber network. 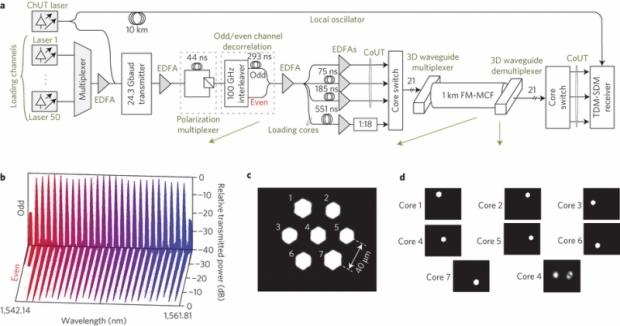 The researchers used a completely new type of fiber, which was able to jump right up to an insane 255 terabits per second. This is a number that is hard to get your mind around, as it can transfer 1GB in 31.25 microseconds, which is just 0.03 milliseconds, or 1TB in just 31 milliseconds. As it stands, single-fiber links used in commercial use today hit a ceiling of 100Gbps, which is a massive 2550 times slower than what this new fiber network is capable of.

This new fiber network uses seven separate cores that were built into a hexagon shape, and by using spatial multiplexing, the researchers were able to hit 5.1 terabits per carrier, with wavelength division multiplexing (WDM) to 50 carriers down the cores. This eventuated into the researchers slamming through 255 terabits per second. Now all we need is every single Internet connection in the world to be upgraded, NICs to be up to 10TB/sec and cheaper, faster SSDs to handle all of this insane bandwidth.