Oh, Ubisoft. The latest in a massive string of frame rate-related news, the Creative Director of Far Cry 4 has stepped forward to talk about Far Cry 4's frame rate on consoles. The upcoming adventure-based first-person shooter will be rendered at 1080p on the PS4, which is great and all, but it is locked at 30FPS, making it yet another Ubisoft title to be locked at the potato-powered frame rate. I'm sure that Ubisoft locked it at 30FPS, because we know that they think 60FPS "looks weird". 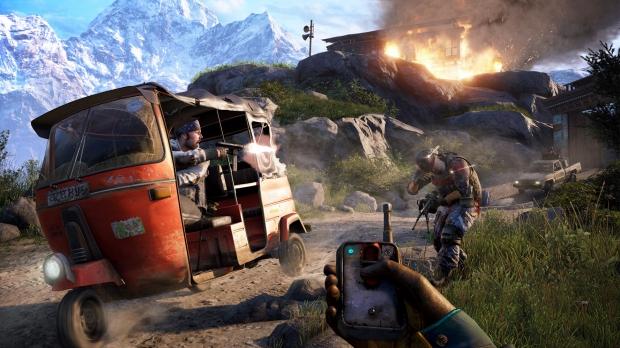 Alex Hutchinson, the Creative Director behind the game, replied to someone on Twitter who was asking "why not 1080p 60 fps", to which Hutchinson replied: "We'd have to simplify the art, have less people or events on screen or make other sacrifices". Someone else asked about the Xbox One version of the game, where Hutchinson said "We will announce all PC and console specs in crazy detail very soon: no point restricting it to Twitter. XBone looks great".

When it comes to the Xbox One version of Far Cry 4, versus the PlayStation 4 version, Hutchinson said he couldn't really tell a difference between the two. He said: "I would say identical but then some asshat would say a tree had one more leaf on xbone. So let's say I don't see a difference". It should be interesting to see what resolution Far Cry 4 is running at on the Xbox One, but judging from previous games on the PS4 running at 1080p, we should see Far Cry 4 on the Xbox One running at 900p, or possibly 1080p with some things dialed down to maintain that massive 30FPS frame rate.