Oculus VR is ramping up its Rift DK2 unit, which features a 1920x1080 display inside of the VR headset. GameFace Labs is a company you may not have heard of, but it has just announced that it is the first company to show off a prototype VR headset with a 2.5K display. 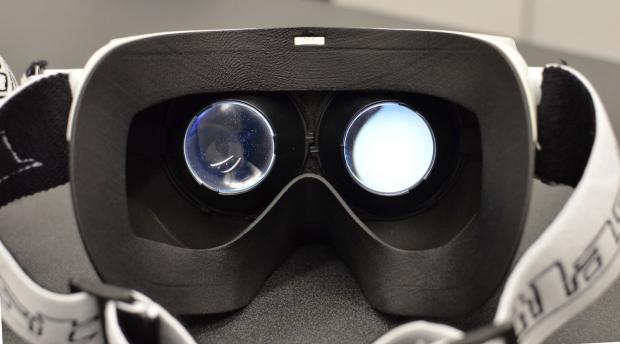 2.5K is just a fancy way of saying 2560x1440, where at this resolution, it is pushing out 78% more pixels than a 1080p-based display, such as the Oculus Rift DK2. Ed Mason, CEO of GameFace Labs explains: "The upgrade to 1280 x 1440 per eye is monumental. Individual pixels are hard to detect at first glance, making it a more immersive and comfortable experience in every single game and experience that we've tried. A lot of the 'presence' described by devs at the Valve [prototype VR headset] demonstration can be attributed to their use of higher resolution (and lower persistence) panels, which has a noticeable impact in suspending disbelief and tricking the brain".

Better yet, the company is just stopping at 2.5K, as it wants to get one of the most powerful mobile solutions into its VR headset, making mobile VR a reality. This is actually something I talked about Oculus VR doing, but it seems that GameFace Labs is the one we should be watching. The company is rubbing up against NVIDIA's very impressive Tegra K1 aka Jetson, which is a super powerful system-on-a-chip (SoC) solution that has a quad-core processor running at 2.3GHz with a 192-core GPU.

K1 supports up to 4K displays, with NVIDIA calling it the "world's most advanced GPU" as it can run Unreal Engine 4 with DX11 at under 5W of power. Mason has shown off photos to Road to VR using the K1 board that it is baking into its latest mobile VR prototype. My mission now? To get eyes-on with this new 2.5K VR headset.