What are Google's plans with digital currency, Bitcoin? Nothing it seems, with the Mountain View-based giant talking to The Next Web, confirming the news that it doesn't have any immediate plans to use Bitcoin.

A Google spokesperson told TNW: "As we continue to work on Google Wallet, we're grateful for a very wide range of suggestions. While we're keen to actively engage with Wallet users to help inform and shape the product, there's no change to our position: we have no current plans regarding Bitcoin". 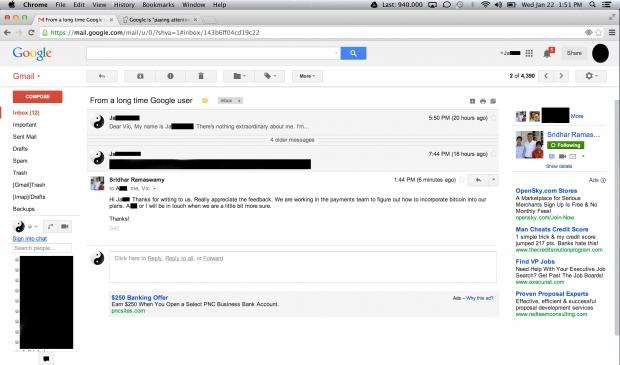 Google was forced to come out and talk about it after a recent Reddit thread that tackled the digital currency issue, after a Reddit thread was titled "Google confirms their payments team is working to incorporate bitcoin". The user who posted the thread said he had e-mailed Google's Senior Vice President of Social, Vic Gundotra, asking him if the company was going to support Bitcoin.

Gundotra then allegedly forward the email to Sridhar Ramaswamy, Google Wallet's Senior VP, who replied with: "We are working in the payments team to figure out how to incorporate bitcoin into our plans".

But with TNW talking directly with Google, we know this isn't the case - and it is disappointing.